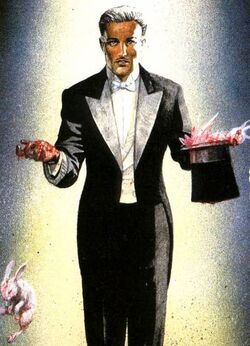 Giovanni "John" Zatara is a powerful stage magician and wizard who uses backwards magic. He is the father of Zatanna and a mentor of Batman.

John Constantine comes to get Zatanna, Mento and Sargon the Sorcerer to come together to help demonic and divine forces in other hellish dimensions battle the entity known as the 'Great Evil Beast'. The séance is held at Wintersgate Manor, the home of Baron Winters in Georgetown, Washington which is also a temporal threshold to other plains of reality. Because Constantine had previously taken Zatanna to a "tantric studies meeting," Zatara will not let Zatanna out of his sight with Constantine present, and by his very presence, is forced to take part in the seance to which he was not invited. The Beast, who is so tall its thumb alone looms over Hell, takes notice of their group twice. The first glimpse dooms Sargon, whom Zatara convinces to 'die like a Sorcerer' and not break the holding of hands. Sargon burns to death nobly. The second glance literally heats up Zatanna. Zatara willingly takes the effect onto himself, dying (his smoldering hat lands on the table) but sparing his daughter's life. (Swamp Thing (Vol. 2) #50)

Many years later, Zatara, Zatanna, John Constantine and Sargon the Sorcerer, among others, came together to battle the Great Evil Beast. While battling The Beast, Zatara and Sargon were killed. The Beast was ultimately neutralized by other forces.