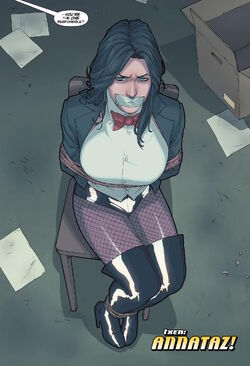 Zatanna is a gorgeous, dark-haired Caucasian woman of average height, given to wearing flamboyant clothing - as befits a professional showman. She is often seen in her stage gear of a top hat, formal coat and tails, and fishnet tights, which doubles up as both her stage gear and her crime-fighting uniform. However, she also has a wide wardrobe of dress-down clothing, typically with a gothic bent to it.

In terms of her personality, Zatanna is a charismatic, cheerful and outgoing person, easy in all company and with a talent for taking the spotlight. However, she is also extremely brave and selfless, and regularly puts her life on the line to protect innocents. She is confident in all aspects of her life, including her romantic relationships, and - at least up until his reintroduction to the DCU in 2011 - was shown to be on good terms with John Constantine, one of her exes.

Zatanna was born to a human mage, Giovanni "John" Zatara, and Sindella, a member of the homo magi sub-race of magical humans (some series also suggest that Zatara was a homo magi too). Her mother disappeared when she was just a small child, forcing Giovanni to raise her by himself - although both Doctor Occult and Rose Psychic stepped in as surrogate parents from time to time. Like her father, she became both a stage magician and a real-life magus, able to cast spells by speaking backwards.

In her original appearances in the 1960s, Zatanna was seen to be searching for Zatara, who had gone missing. Her adventures caused her to interact with various heroes, and she eventually became a member of the Justice League of America. At some point after finding her father, she began an irregular affair with John Constantine, which continued into 1987, when he was also dating Emma.

Although Constantine was ultimately responsible for her father's death (he organised a fatal seance during which Zatara sacrificed himself to protect his daughter), the two continued to have a friendly, if non-sexual, relationship for years afterwards.

However, upon Constantine's re-introduction to the DCU in 2011, their history was altered to make Zatanna more unhappy about their former relationship. In The Search for Swamp Thing issue one (2011), she is shown to begrudgingly heal Constantine at Batman's request, before warning him that Constantine has a habit of lying and hurting people. Their relationship will be explored further in Justice League Dark.

Because of her prominence in DC's mainstream comic line, particularly the JLA books, Zatanna made relatively few appearances in Vertigo comics during the period in which crossovers were less common. Nevertheless, she did have a few appearances, all involving John Constantine. In contrast with their post-2011 relationship in the DCU, Constantine and Zatanna were always shown to be friendly exes, still prone to flirtation.

In Hellblazer issue 63 (1993), Zatanna attended John Constantine's fortieth birthday party - out of costume - alongside other supernatural characters such as Swamp Thing and The Phantom Stranger. In a scene that caused some minor controversy at the time, she smoked a large spliff with Constantine and several other characters.

At the dawn of the second millennium, Constantine organised a party for the Vertigo Universe's supernatural set, including Zatanna. He drunkenly came onto her but she cheerfully turned him down, adding: 'reven niaga'. (Totems, 1999)

John Constantine also sought Zatanna's help after being cursed by a rival magician in the one-shot comic Zatanna: Everyday Magic (2003).

A blonde-haired version of Zatanna appeared in Books of Magick: Life During Wartime as an ally of Tim Hunter, fighting alongside humans and fairies against a group of fairies who wanted to rule mankind. However, this Zatanna was, along with everyone else in that world, a creation of Tim Hunter, who had accidentally created his own universe.

In the comic book series Kingdom Come, set in a possible future timeline, it is revealed that she and John had a son, Zatara II.

Retrieved from "https://hellblazer.fandom.com/wiki/Zatanna?oldid=11064"
Community content is available under CC-BY-SA unless otherwise noted.