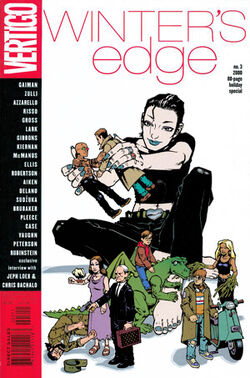 What do you want for Christmas? Your answer could be influenced by Desire, cover featured on this year's VERTIGO: WINTER'S EDGE III, a holiday anthology sampler of current and upcoming projects from the acclaimed line of mature-readers titles.

Desire takes the lead story as well as the cover (a line-art creation by THE INVISIBLES' Philip Bond) in a wintry tale written by THE SANDMAN's Neil Gaiman, with art by THE SANDMAN: LOVE STREET penciller Michael Zulli. This period piece is set during a blizzard that forces a train to tumble, leaving many hearts and lives completely shattered.

The 100 BULLETS writer-artist duo of Brian Azzarello and Eduardo Risso tell a story of the 1960s, where the recipient of Agent Graves's special briefcase and gun may be the missing link in the ultimate conspiracy theory.

Writer Peter Gross and artist Michael Lark (SUPERMAN: WAR OF THE WORLDS, SCENE OF THE CRIME) open THE BOOKS OF MAGIC for a tale of the ever-inquisitive Dead Boy Detectives (last seen in THE SANDMAN), who breach Tim Hunter's safe haven at the Inn at the End of the World, rolling into town as a human snowball.

WATCHMEN artist Dave Gibbons writes and draws a holiday story of HELLBLAZER's John Constantine , who encounters a man called Herod, searching London for a prostitute who is heavy with child. Only Constantine can stop the killing, but does he want to?

Caitlín R. Kiernan, writer of THE DREAMING, teams with PROPOSITION PLAYER's Bill Willingham to share a Pleistocene winter's tale about one of Morpheus's former ravens.

The TRANSMETROPOLITAN team of writer Warren Ellis and artists Darick Robertson and Rodney Ramos spread holiday cheer as outlaw journalist Spider Jerusalem manages to have a millennial moment in the snow, even in a city where no one seems to know what year it is.

Written by Jamie Delano (HELLBLAZER) with art by newcomer Goran Sadzuka, which introduces a clan of immortals in the American West.

Written by Ed Brubaker (SCENE OF THE CRIME) with art by Warren Pleece (TRUE FAITH) and Richard Case (THE SANDMAN), which follows an unforgettable group of dead-end teenagers roaming through a post-apocalyptic nuclear wasteland

Written by Brian Vaughn (X-Men, Wolverine) with art by Roger Petersen (SubHuman) and Joe Rubinstein, which reintroduces Tefe Holland as the 18-year-old half-Elemental, half-human searches out expert advice about her strange new powers, along the way learning about the deadly effects of mistletoe

Completing the Special is an interview with writer Jeph Loeb and artist Chris Bachalo on their new VERTIGO miniseries, THE WITCHING HOUR.

Retrieved from "https://hellblazer.fandom.com/wiki/Winter%27s_Edge_issue_3?oldid=10917"
Community content is available under CC-BY-SA unless otherwise noted.