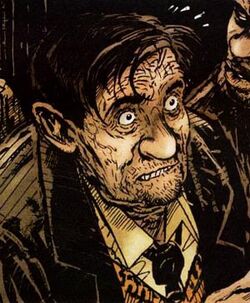 Watford is a detective chief inspector in the London Metropolitan police force. Watford is not his real name - it's a nickname after he was committed a shocking (and presumably sexual) act in the London borough of the same name. He became so infamous for this, in fact, that many people on the force don't know his actual name (indeed, it has never been revealed in the comic). He first appeared in Hellblazer issue 134.

Watford appears to be in his mid-to-late 50s when we first meet him, with a wrinkled face and scratchy side-parting. He is cynical, bigoted, antagonistic and happy to break or bend the rules, but - as seen when he helped John Constantine get revenge on a murderer - he still has a sense of justice somewhere in his blackened heart. He refers to murder victims as 'it', possibly to distance himself from the violent nature of the crimes.

Although he works in the robbery division, Watford is a useful source of intel for Constantine - something Watford doesn't much enjoy. However, he is extremely well connected within the police force both in London and nationally, making him the go-to man for such things.

A crucifix was seen on his wall in Hellblazer issue 176, suggesting that he is a Christian.

At some point prior to his appearances in the comic, Watford did something, the details of which remain unknown, on Watford high street. Only Constantine knows the full story, but what did get into the public domain was interesting enough to mean that nobody ever called him anything other than 'Watford' ever again. (Hellblazer issue 134, 1999)

Years later, Constantine came to Watford for help after his ex, Isabel Bracknell, was murdered. Watford supplied John with photos of the body and access to the crime scene, which helped John track down the culprit: a magician named Joshua Wright. Watford also helped Constantine apprehend Wright and get revenge on him. (Hellblazer issue 134 and 138-139, 1999)

The following month Constantine returned the favour by helping Watford out: two suspects in a robbery case had been murdered by a deranged man named Colin Gates. Gates turned out to be a prolific serial killer whose murders had actually tainted the room he was in, sending the two policemen who went in for him completely insane. John was able to get in, stay sane and subdue Gates. (Hellblazer Issue 140, 1999)

Constantine later contacted a grumpy Watford for information on a series of murders occurring in Liverpool. Watford gave him the info before signing off in characteristically gruff manner. (Hellblazer issue 176, 2002)

Years later, Gary Lester's spirit possessed the body of a dead suspect to get a message to John. Watford duly informed him of the event, though the cop was more interested in finding out the identity of the dead man than letting Lester get his message across. (Hellblazer issue 181, 2003)

Watford and Constantine didn't cross paths for a long time, until John used him to get access to the police mortuary while investigating a strange murder. (Hellblazer issue 229, 2007)

In 2008 an armed response officer accidentally shot an illegal immigrant who was trying to get something to Constantine. Watford took the item to John, but not before getting a pay-off from the officer involved for making such a vital bit of evidence 'disappear'. (Hellblazer issue 240, 2008)

Retrieved from "https://hellblazer.fandom.com/wiki/Watford?oldid=11332"
Community content is available under CC-BY-SA unless otherwise noted.