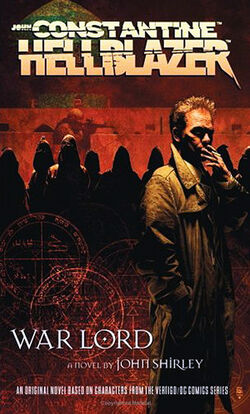 Englishman and amoral occultist John Constantine has been out of sorts lately, disconnected from himself...and this time not from another bender, but quite literally, as his soul is cast adrift during a fouled-up spiritual quest in an Iranian monastery. Now rescued and recruited by an agent for the Hidden World -- the supernatural realm that exists far beyond everyday mortal awareness -- Constantine and his extraordinary allies are forcibly dragged into a globe-spanning conspiracy. For the secret cabal known as the Servants of Transfiguration has set in motion a horrifying plot to raise the ancient demon god known as the War Lord -- and bring about a last great war that will annihilate everything on Earth....

Retrieved from "https://hellblazer.fandom.com/wiki/Warlord?oldid=9309"
Community content is available under CC-BY-SA unless otherwise noted.