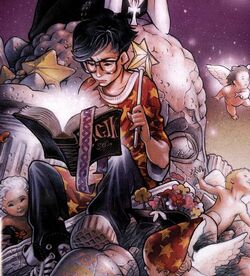 Timothy "Tim" Hunter is a young British kid destined to become the greatest mage in the world, and is the main protagonist of The Books of Magic series. Tim was born as a conduit for the raw magic that shared the name of the most famous magician to serve it: "The Merlin". In order to increase his power and his legend, the Merlin arranged for Tim to have multiple, contradictory stories about his birth that nonetheless were each equally true. He was at one and the same time the illegitimate son of Tamlin the Falconer and Titania the Queen of Faerie, the son of Tamlin and a beautiful human girl called Mary and any number of other possible origins.

As he started to grow up, Tim started to attract the attention of mystic groups such as the Cult of the Cold Flame, who wanted to seduce him into becoming a force for evil. Indeed, at this point, Tim's destiny was at a crossroads: he could become the greatest magician of his age for good or for evil, or indeed never learn of the world of magic at all. In order to resolve this ambiguity—and hopefully prevent his turning to evil—a group of mystics jokingly called The Trenchcoat Brigade set out to offer Tim the chance to learn all about magic. Tim agrees to be taught, and then make his decision about whether to let magic into his life or not.

Tim was also the apprentice of bothZatanna and John Constantine.

Tim first met John Constantine when the con man shows him the present world of magic, traveling to America to meet Madame Xanadu, the Spectre and his (then) host Jim Corrigan, Baron Winters and an adult Jason Blood. When the Trenchcoat Brigade discover that Tim is in imminent danger from the Cult of the Cold Flame, Constantine leaves the boy in the care of Zatanna while they face the cult in Calcutta. On Halloween, Zatanna takes Tim to a club called Bewitched, a place populated by a number of villainous black magic users in the Vertigo/DC Universe. In an ill thought-out move, Zatanna seemingly breaks a cardinal rule of magic—not to reveal one's true name to possible enemies—when she introduces Tim to the club owner, Tannarak. Soon, the revelers start to attack Tim and Zatanna, and are stopped only by the reappearance of John Constantine. John managed to scare away the Cult using only his "reputation" and saves both Tim and Zatanna. Zatanna grudgingly thanks John for it.

Later, like most of humanity, Tim fell under the power of the "beast that Adam never named", until it was finally defeated by John Constantine. Both would later have a good relationship with one another since both are British, with John looking out for Tim from time to time.

Alternate History between the two

Timothy was once a member of the New 52 team Justice League Dark. After leaving the path of magic once and for all, Timothy is again pushed back into it. John Constantine and Timothy Hunter has a more well written relationship with one another.