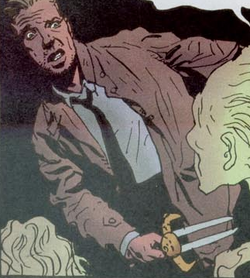 The Twin Blade is a powerful weapon created by Ellie and owned by John Constantine. It first appeared in Hellblazer issue 79.

The blade first appeard as a 3-4 feet long sword and has two blades portruding. Created from the remains of the omnipotent Second of the Fallen and Third of the Fallen, it is very powerful, able to kill anyone, even Satan. It deals massive damage to anyone it wounds and it can pierce through a demon's hide, which is known to be stronger than steel and armor, and can create damages to the victim's souls. Because it was created from the remains of two omnipotent beings, a wound from it can cause instant death to anyone even omnipotent and omnipresent beings. It can kill even with just a touch.

It was first seen being created by Ellie disguised as Astra with insructions from John Constantine. She used it to stab and kill the First of the Fallen (Rake at the Gates of Hell). Because of the First's powers, he didn't die but was instead turned into a powerless mortal. John later kept it in a box together with his other magical weapons.

It later appears in Critical Mass, where the Demon Buer tries to get hold of John's soul. While preparing to con the demon by making a copy of himself, he later takes the blade from the box (Hellblazer issue 94) and gives it to Astra secretely. During a severe standoff between Buer and John (actually the Demon Constantine as bait), Astra gave it to the Demon Constantine, and he tried to kill himself with it and succeeeds. But is ressurected afterwards. Constantine kept it as a keepsake.

In Hellblazer issue 217, John uses a similar blade to kill a group of demons with a simlar sword the new comic book series Constantine, a similar blade called the Moonblade appeared as one of John's arsenal of magical weapons. The blade is said to shape with the different faces of the moon (Longsword when its full moon, dagger when its new), and just like the twin blade, it can kill anyone with one clean hit. John used it to kill the now antagonist Mister E. Those killed by the moonblade has their spirits stored in it, making them the perfect slaves for Constantine.

Retrieved from "https://hellblazer.fandom.com/wiki/The_Twin_Blade?oldid=11343"
Community content is available under CC-BY-SA unless otherwise noted.