Start a Wiki
The Trenchcoat Brigade #4 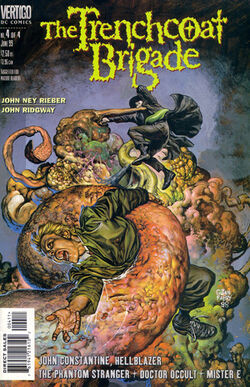 The Trenchcoat Brigade #4 (June 1999) continues the four-part miniseries. John Constantine, Mister E, Doctor Occult and The Phantom Stranger find themselves facing up against a foe that even they may not be able to stop.

Still sore from their recent experiences of each each other's private hells, the four errant members of the Trenchcoat Brigade, confront Pyotr about the events which led to the extinction of the human race. Still visibly upset by the by the secrets of Doctor Occult's past, The Phantom Stranger comes dangerously close to killing the guilt stricken Pyotr before he can reveal the fate of the world.

With Pyotr's head returned to his body, he casts a visionary spell so that the four Magi may bear witness to M'Nagalah's consumption of mankind. The Brigade, along with Pyotr, watch as M'Nagalah, the cancer god, perches atop a building. His rotting purple tendrils swing down and snatch up helpless civilians, whose skin immediately begins to melt, breaking down and being absorbed into its body.

The mystics are baffled, however, as the cancer god can only be called into existence if its summoner allows it to use him or her as a vessel. They have no idea who would be so powerful and so foolish. But Pyotr does. He takes them all back to Chernobyl, almost in the present day. In the wilderness outside the city, Elliana closes the eyes of the last of her people and, having nothing in her heart but a weary hatred, decides that she will finally give in to M'Nagalah's power, letting him kill her if he'll take the rest of humanity.

But before she'll acquiesce, she demands revenge for herself as well as her people. At that moment Pyotr - a pre-apocalypse one, slightly younger than the one Constantine and co have met - crawls in from the woods. Pyotr asks why he has been kept alive and M'Nagalah says it is to make the most of the conscience they have given him. Pyotr says that explains why he began to hear terrible guilty voices in his head. The cancer god says that if he offers up his own life to complete the summoning, he will finally be allowed to die and Pyotr, overcome with guilt and misery, agrees.

But as Elliana begins the ceremony, the Brigade - and the old Pyotr arrive. But it's too late: Elliana has pulled the cancer god fully into our world. Doctor Occult, Mister E and John all fire off the containment spell that they worked up, but The Phantom Stranger refuses to finish it, saying that he'd rather the world die than he and Occult exist in love and alone forever. Rose steps into Doctor Occult's body and - after a brief aside about how much she hates cliches like these - tells the Stranger that where there is life, there is hope.

The four finally launch the containment spell, but the cancer god has grown too strong and only the timely diversion of the older Pyotr saves them, as he severs both Elliana's link to M'Nagalah and his younger self's head. He cheers as he begins to vanish from the timeline, having never existed at all.

Separated from the dark God, Elliana recognises the error of her actions, lays her own guilt down and burns the Book Of Ending. M'Nagalah desperately submerges itself in Mister E, recognising the great guilt within him. As the remaining members of the Brigade debate the wisdom of dispatching their now comatose colleague, Rose explains how her experience of Mister E's hell has led her to believe that he is capable of overcoming M'Nagalah.

Mister E regains consciousness and appears to have come to terms with his guilt. He stakes his white trenchcoat to a tree and, as the four of them walk away into the sunset, says that he has returned to being plain old Erik.

Retrieved from "https://hellblazer.fandom.com/wiki/The_Trenchcoat_Brigade_issue_4?oldid=9056"
Community content is available under CC-BY-SA unless otherwise noted.