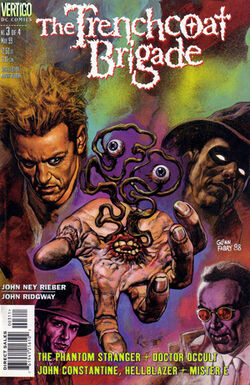 The Trenchcoat Brigade #3 (May 1999) continues the four-part miniseries. John Constantine, Mister E, Doctor Occult and The Phantom Stranger manage to defeat each-other's demons, but not in time to stop a terrible force being unleashed upon the world.

Elliana, daughter to The King Of The Leshy, is skipping along happily thinking about her love, Pyotr Konstantin, when she stumbles upon a severed head. Not recognising that the head belongs to an aged future version of her love, she picks it up and puts it back on the man's body. Still alive - thanks to powerful magic - Pyotr reveals the plans of his younger self to kill the King and steal The Eye Of The World. Elliana, disbelieving, grows angry and slaps Pyotr's head from his shoulders in disbelief. She leaves him to the woodland creatures, while Pyotr sinks further into self-pity.

E and Constantine, meanwhile, discuss the events of Newcastle, which they shared thanks to Pyotr's spell in the last issue. E says that he misjudged Constantine, not knowing that he'd stood up to a lord of Hell to try to protect a little girl's soul. E says that John may have failed, but he showed more courage than E did when, as a young boy, he gave his sister up to their abusive father rather than resist him.

Elliana returns to her father's castle to find the guards murdered and the younger Pyotr making off with the Eye Of The World. He laughs as he points at her father's slit throat, his sword green with Leshy blood, and says that he will keep the sabre to remember her by. She tries to grab the Eye of the World from him, saying that it is the only thing protecting her people from the outside world but he knocks her to the ground. He tells her that she should run as a thousand human men are outside the woods, waiting to burn, rape and pillage her father's kingdom. As he leaves, Elliana retrieves The Book Of Ending from her dead father's throne and vows vengeance for her people.

Doctor Occult opens his eyes to find himself in Mister E's guilty memory. He finds his memories running parallel with those of E's: his own memories are of, as a young teen, learning arcane lore under his master's tuition and, later, of being scolded by his master for playing naked in the water with a teenage girl rather than staying chaste.

E's memories are darker: he remembers finding a porn mag and being beaten by his abusive, religion-obsessed father, then taken to the attic where his father straps him to a chair and gouges out his eyes with a sharpened spoon. But before the first eye can come out, Rose, Doctor Occult's lover and the woman with whom he shares a body, appears before him. She says that this memory isn't real, and that his father gouged out his eyes as punishment for finding pornographic images of his mother and sister under his father's bed. But Erik loved his father too much to accept the truth, instead inventing a story about reading a pornographic magazine. Doctor Occult, recognising that the spirit is nothing but someone else's guilt, is freed into the real world. Before he wakes, Rose asks him whether it strikes him as unfair that they can only touch one another in unconscious realms like this one.

With the Eye Of The World stolen, there is no longer any defence for the Leshy, and Elliana is forced to watch as her younger sister is taken by Cossacks. Elliana is apparently stung by The Book Of Ending and finds a fleshy growth appearing on her hand.

The Phantom Stranger is the last of the Brigade to comes to. Constantine, thinking that the worst Doctor Occult has had to endure is 'memorising the true name of every grain of sand on the planet', takes the piss a little but the Stranger, clearly distressed at experiencing Doctor Occult's own personal hell, warns him to back off or experience extreme pain. John, taking the advice, decides to tap into the synchronicity highway to find his ancestor, and immediately stumbles across Pyotr's severed head.

Elliana, meanwhile, is lost to despair as her efforts to read the Book Of Ending fail. The mysterious growth has now covered her entire hand and she's shocked when it sprouts two small eyes and a mouth, introducing itself as M'Nagalah and promising to teach her how to read from the book.