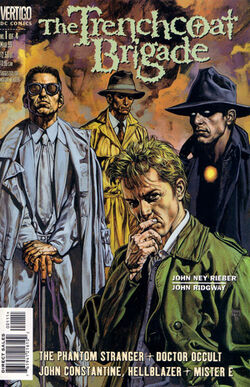 The Trenchcoat Brigade was a four-issue miniseries that ran in March 1999 as a spin-off from the original Books of Magic miniseries. It was written by John Ney Rieber, who also wrote an ongoing Books of Magic series.

An apocalyptic vision glimpsed by madman Mister E sends John Constantine, The Phantom Stranger and Doctor Occult into a ruined future, where an ancestor of Constantine's, long thought dead, holds the key to saving the entire planet.