Start a Wiki
The Third of the Fallen 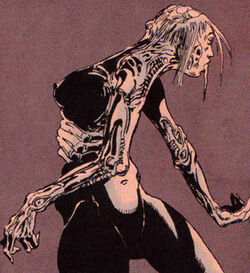 Like all demons, The Third of the Fallen is able to take on any form it pleases; unlike most it takes a particular delight in changing its form and is usually shown with a different shape in every panel of the comic. It is aggressive and vicious, and takes delight in causing both emotional and physical pain.

In the 1980s the Third of the Fallen was summoned by Anette, a friend of John Constantine's who wanted her boyfriend, Seth, to be punished for abusing her. The Third then took on Annette's form and castrated Seth. When she realised what damage she had caused, Anette killed herself. (Vertigo Jam 1, 1993)

Retrieved from "https://hellblazer.fandom.com/wiki/The_Third_of_the_Fallen?oldid=6781"
Community content is available under CC-BY-SA unless otherwise noted.