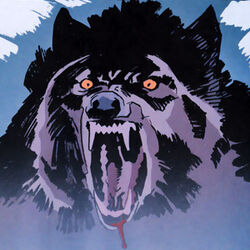 The Shadow Dog, or Kua I'ipa, is a creature created to protect mankind from The Beast, a monster without a specific physical form. However, the Dog's presence at various disasters across the world caused people to believe that it was the cause of, not the cure for, the disasters it was seen near. As a result John Constantine incorrectly assumed that it was an enemy. It first appeared in Hellblazer issue 179.

As its name implies, The Shadow Dog is an enormous black dog - one that's as fearsome as it looks. It stalks the dreams of men who would help free The Beast and is capable of crossing over, briefly, into the physical realm if The Beast should inhabit a human host. It has a single-minded determination to destroy its prey and this ferociousness can be easily mistaken for mindless fury.

When Adam named the animals in the Garden of Eden, one managed to escape being named - this allowed it to take any form it wanted, even to escape the physical world entirely. This creature, The Beast, then followed Adam out of Eden hoping to destroy him and his children. The Shadow Dog was created to protect mankind from it, but over the years it began to be associated with The Beast's terrible actions, until people began to believe it was the cause of them. (Hellblazer issue 190, 2003)

The Shadow Dog was first seen in the dreams of Zimbabwean crime lord Domine Fredericks. He was hoping to take possession of the Red Sepulchre, a powerful mystical item that could open the doors between this world and the afterlife - but as this would make it possible for The Beast to cross over, the Dog felt the need to dissuade him. John was able to stop Fredericks - but not before the first door was opened. (Hellblazer issue 179, 2003)

Over the next year John and Angie Spatchcock, a magician, managed to find out about The Beast's past, wrongly attributing it to The Shadow Dog, and put together a team of magicians to kill it. Unbeknown to them, The Beast had taken up residence in the body of Jason Spatchcock, Angie's brother. The Dog tried to attack and kill him but Angie was able to scare it off with a blood sigil. Eventually they were able to summon the Shadow Dog into a pentagram and it immediately attacked 'Jason' - but now it was weakened and The Beast was able to kill it easily. (Hellblazer issue 189-190, 2003)

The next few days saw almost all of humanity being taken over by The Beast, which forced them to kill themselves and each other for its own amusement. However Gemma Masters, acting under direction from her uncle John and with the help of Angie, Chas Chandler and Swamp Thing, was able to resurrect The Shadow Dog from the collective unconscious of mankind. It consumed The Beast, narrowly averting mankind's complete extinction. (Hellblazer issue 189-190, 2003)