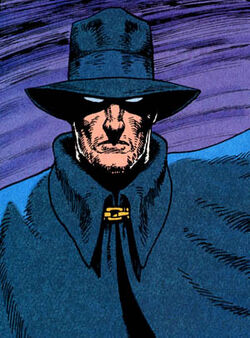 The Phantom Stranger is an extremely powerful, immortal being of unknown origin whose role is generally to maintain the balance of good and evil - although he is usually shown to be on the side of good rather than evil.

The Phantom Stranger takes the form of a very tall Caucasian male in his mid-40s, with a blue suit and trenchoat, and sometimes a blue cape. He wears a blue fedora hat which typically shades his eyes; when his eyes are seen, they are either glowing or a pure white.

The Phantom Stranger is, as his name suggests, a man of mystery. Typically portrayed as aloof and distant, he is rarely shown to be passionate in any regard, though he can sometimes be provoked into furious anger - usually by John Constantine, whose sarcastic demeanour clashes with his own, more composed personality. On several occasions he has been offered membership of groups and societies, but usually turns them down - often saying that he 'must remain a stranger'. It is sometimes implied that this condition is not decided by him, and to spend his existence separate from the rest of the universe takes its toll on him.

The exact details of the Stranger's past are unknown, to the extent that his 'Secret Origins' comic actually contained four conflicting origin tales. These were: (a) that he was a citizen in Biblical times who questioned God's wisdom and committed suicide; he was then placed back on the Earth to turn humanity away from evil one soul at a time; (b) that, as a human, his son was killed by King Herod, who had ordered the deaths of all children in the hope that the infant Christ would be killed - the man then paid to flagellate Christ prior to his crucifixion and was condemned by God to walk the Earth; (c) that he was a being from a previous universe that existed before the Big Bang; and (d) that he was a fallen angel who had refused to choose between God and Lucifer during the latter's war on Heaven. The fourth story was confirmed in The Trenchcoat Brigade, as John Constantine shared a psychic link with The Stranger and saw his origin. (Secret Origins: The Phantom Stranger, 1987; The Trenchcoat Brigade issue two, 1999) Following the DC Universe Flashpoint event comic in 2011, a new backstory was established confirming the Stranger's identity as Judas Iscariot, the disciple who betrayed Jesus Christ.

Over the following millennia The Phantom Stranger has appeared in multiple DC Universe and Vertigo Universe stories, being one of the few characters - along with Zatanna - with a licence to appear in both worlds. He has even been offered membership of the Justice League of America, although he disappeared rather than actually accept the invitation.

The Phantom Stranger is, along with Mister E, Doctor Occult/Rose Psychic and John Constantine, a member of The Trenchcoat Brigade, a loosely affiliated group of supernatural heroes and anti-heroes who take it upon themselves to intervene in world-threatening crises. They first came together in the Books of Magic miniseries, in which each member showed Tim Hunter, a child with the potential to become the modern era's greatest mage, different aspects of the magical universe. The Phantom Stranger took him back to the birth of the universe, showing him magic throughout human history. (The Books of Magic issue one)

The Trenchcoat Brigade met up again in 1999, when Pyotr Konstantin, a time-travelling ancestor of John Constantine, almost caused the end of the world. During the course of saving the universe, The Phantom Stranger got a glimpse of Doctor Occult's tragic past and was moved to impotent fury by Constantine's subsequent mocking. (The Books of Magic issue one)

Despite their frequently difficult relationship, The Phantom Stranger attended Constantine's 40th birthday party. Unfortunately, he appeared just as a drunken Constantine was urinating outside; as John turned around, he pissed on the Stranger's shoes. The Stranger, having come so close to letting someone in at last, folded in on himself and returned to his solitude. (Hellblazer issue 63)

After Constantine discovered that he was prophesied to die and be condemned to Hell, The Phantom Stranger appeared to him in a dream and gave him the idea to create a clone using the worst parts of his soul that could be sent to Hell on his behalf. When John asked why he was helping, The Phantom Stranger said, 'For balance.' The meaning of these words was revealed in the climax of the story, when the death of the second Constantine both released the souls of all the children condemned to Hell and restored The First of the Fallen to power. (Hellblazer issue 94)

Years later, Constantine accidentally unleashed The Beast, a creature that was poised to destroy mankind. The Phantom Stranger appeared to Constantine and condemned him for doing so. Constantine complained that he was tricked, and asked why the Stranger didn't help out earlier; the Stranger said that he is 'not permitted... to save you from yourselves'. (Hellblazer issue 191)