The King of the Vampires

View source
The King of the Vampires 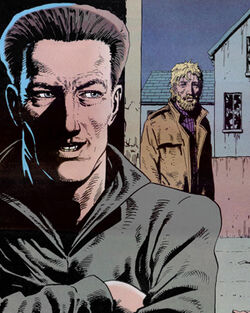 The King of the Vampries is a vampire with an uncanny resemblance to James Dean. He first appeared in Hellblazer issue 50.

The King of the Vampires bears a surprising resemblance to the actor James Dean, complete with leather jacket and brown quiff hair, although he is completely unrelated (a fact that he himself is baffled by). He has spent tens of thousands of years on Earth, killing and feeding on humans. As a result he sees them as little more than cattle and thinks nothing of maiming and murdering them purely for his own amusement.

For the most part, the King looks entirely human, save for a pair of retractable fangs. However, he can also take on different forms, including that of a giant, shaggy dog. It has also been suggested that he can transform into a living mist.

The origins of the King of the Vampires have never been explained, although he admits that he lived on other worlds before this one. (Hellblazer issue 69, 1993) How he travelled between them is completely unknown, but he arrived on Earth around the same time as the first human being, somewhere in Africa. It was from this first man that he fed, claiming his first human victim. (Hellblazer issue 50, 1992)

He continued to walk the Earth for tens of thousands of years, feasting on victims in ancient Rome and WWI. It was in that first World War that he encountered lance corporal William Constantine and drained him of his blood. Eventually he set up his kingdom 'deep inside the planet... unreachable by man' where the vampires, his children, would feed on goggle-eyed cave fish inbetween visits to the surface. He also came to know The First of the Fallen in this time, although The First saw him as a dissolute dandy and he saw The First as an anachronism. (Hellblazer issue 50 and Hellblazer issue 69, 1992 and 1993)

He also began to talk to other outcasts from society - monsters, murderers and madmen - hoping to build up his power-base. (Hellblazer issue 50, 1992)

In 1992, hearing of John Constantine's triumph over The First, Second and Third of the Fallen, the King met with him in late December and offered him a place as a vampire in his court. Constantine turned him down and the King, disbelieving, said that he'd let John go if he could give him one good reason why it was better to be a mortal than a vampire. John told him that he can look into a girl's eyes and know she loves him, nor can he walk in the beautiful sunlight. The King, unable to answer, let him go. (Hellblazer issue 50, 1992)

One year on, John had split with his girlfriend Kit and spiralled into alcoholism and homelessness. The King happened across John and Davy, a rentboy he had befriended, while they were sleeping. The King killed Davy and made his offer to John once more. John refused to become a vampire and the King lunged for his neck, but recoiled almost instantly. as the demon blood in John's veins began to eat away at his face. Weakened, the King was unable to stop John from dragging him into the sunlight, where he burst into flames. (Hellblazer issue 68-69, 1993)