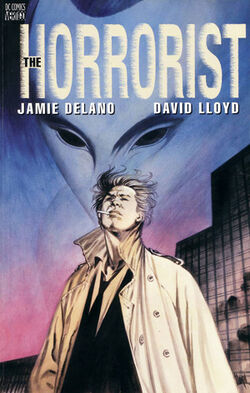 First issue is The Horrorist issue 1.

The story revolves around Angel, who as a young girl was rescued from war-torn Mozambique, and who witnessed the most unspeakable war crimes and atrocities. As an adult, in the present day, Angel becomes a "Horrorist", that is, someone who redistributes pain by unveiling to people the suffering of others. She travels America's roadways, annihilating people's solipsistic existence by exposing them to the unfettered scope of true oppression, famine and murder. Sometimes this takes the form of altered reality, such as several boys playing in the snow dying from landmines that were not there earlier.

Occult detective John Constantine is drawn to Angel, both sexually and psychologically, mostly out of a hope that she can penetrate his emotional numbness. While they have sex, Angel fills Constantine's mind with all the suffering in the world, emptying herself, which ultimately restores a bit of Constantine's lost humanity at the apparent cost of her life.