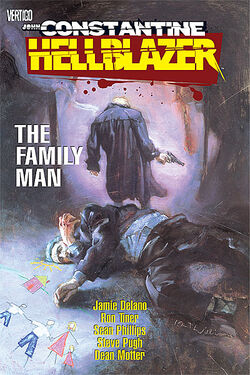 The Family Man collect issues 23-24 and 28-33 of the Hellblazer series. Of the missing issues, 25-26 are collected in Rare Cuts and issue 27 is collected in Neil Gaiman's Midnight Days.

Collecting Hellblazer #23-24 and #28-33, this collection features one of the creepiest stories from fan-favourite Hellblazer writer Jamie Delano! A twist of fate sends John Constantine into the path of a serial killer known as The Family Man, whose bloody actions force the con-man mage to make a shattering choice in their final showdown.

(Issues 24, 28-30) John plays a game of cat-and-mouse with a serial killer who targets families. But soon it's not clear just who is hunting who...

Mourning of the Magician

(Issue 31) When John's niece, Gemma, finds herself haunted by a dead relative, John must delve into his own dark past to put right a terrible wrong.

(Issue 32) Grisly murders at a homeless shelter look to be the work of a rabid dog - but the truth is far stranger and more gruesome than even Constantine could expect!

(Issue 33) John passes into a strange parallel world where meaning and language are being torn down.

Retrieved from "https://hellblazer.fandom.com/wiki/The_Family_Man?oldid=10662"
Community content is available under CC-BY-SA unless otherwise noted.