The Ace of Winchesters

View source
The Ace of Winchesters 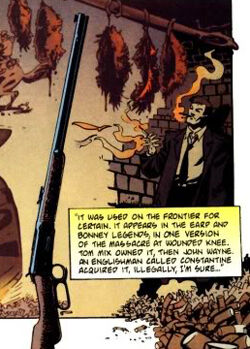 The Ace of Winchesters is a magical rifle first introduced in Hellblazer issue 72 by Garth Ennis and later featured as a major plot point in Ennis's superhero action-comedy Hitman. It has the power to annihilate demons - notable because they are almost impossible to completely destroy otherwise.

It is the first of two crossovers from Hellblazer to Hitman - the second being the servants of The King of the Vampires.

The Ace was created in the Old West by an unnamed mystic who served with the Texas Rangers and sold his soul to gain the expertise required to make the gun. The steel of a halo, gems from Hell and the bones of saints were incorporated into the gun, which gave it the power outright destroy demons. It subsequently got passed around the plains and became the stuff of legend. (Hitman issue 16, 1997)

Sometime prior to 1989, the rifle came into the possession of a man named Zeerke who was probably being backed by Papa Midnite. Constantine and Brendan Finn decided to buy it up, but to afford the £500,000 price they had to get financial backing from Jerry O'Flynn. However, Zeerke doubled his asking price so the pair simply stole it off him - resulting in a sticky end for Terry Cox, the middleman. O'Flynn took ownership of the rifle and sold it on for a profit. Constantine later remarked that the gun was haunted - 'and not just by any old ghost, either' - but no explanation was given. (Hellblazer issue 76, 1994)

Eventually the rifle ended up in the Gotham City Museum of Antiquities, where a mysterious figure paid Catwoman a million dollars to steal it. The figure turned out to be the Mawzir, a demon, who wanted to kill hitman Tommy Monaghan and needed to make sure that the gun wouldn't be used on him. Monaghan and his associates, aided by Catwoman, managed to get the gun back and kill Mawzir. Catwoman then took the gun so that she can sell it. (Hitman issue 16-20, 1997).

Finally, a gun that looks like - but was never explicitly identified as - The Ace of Winchesters was used by a possessed Chas Chandler to blow Swamp Thing's head off. However, as Swamp Thing's mind transcends its physical form, it was able to grow its head back and suffered no lasting damage. (Hellblazer issue 192, 2004).