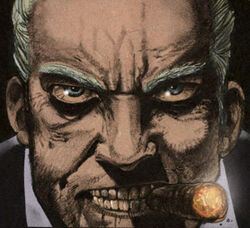 Terry Greaves is a mob boss and the fiercely protective father of Epiphany Greaves - which makes John Constantine one of his least favourite people in the world. He first appeared in Hellblazer issue 258.

Terry is around 50 years old and physically imposing, with a body that looks like he used to work out but has gone to seed. He has the orange complexion of a white man who's spent a lot of time living in sunnier climes - most likely the Costa Del Sol and similar Spanish expat havens - and his white hair is extremely receded. He wears sharp suits and jewellery, as befits a successful organised criminal.

Also befitting an organised criminal is his attitude, which can go from quiet menace to murderous brutality in an instant. He will kill without hesitation and is no stranger to a fight. Although he is extremely misogynistic in his views and thought nothing of hitting his wife, Terry dotes on his daughter, Epiphany. Unfortunately this includes menacing any man that he thinks may be interested in sleeping with her, including John Constantine.

Terry was born in 1956 and grew up terrorising North London and the East End and by the 1970s he was living in Islington, North London. He met his wife-to-be, Brenda, at some point before 1976, although he continued to sleep around with other women. When he was 20 he was sent to prison for three years and was released in 1979 a much tougher, meaner man. Over the next 30 years he took over most criminal operations in North London, with the exception of child pornography, which he took a moral stand on. In 1986 Brenda gave birth to Epiphany Greaves, whom Terry doted on enormously. Brenda died of breast cancer nine years later. (Hellblazer issue 272, 2010)

When Epiphany was 10 Terry saw an opportunity to bring her into his criminal organisation by sending her to alchemy school. His uses for her subsequent knowledge included creating addictive substances that he could sell to prisoners. Epiphany believes that her last truly happy time was in 1996, before Terry sent her to alchemy school. (Hellblazer issue 260, 2009)

Terry's brother, Pat Greaves was later remanded in Belmarsh Prison for crimes unknown, but broke out in 2010 after a demon named Julian began causing havoc there. (Hellblazer issue 275, 2011)

At some point prior to 2009, one of Terry's other brothers (unnamed) was shot by a rival gang and his body was buried beneath the Arsenal stadium in North London. Terry and his fourth - also unnamed - brother tried to resurrect him but the fourth brother, the one who used the resurrection potion, was impure of spirit and was rendered permanently catatonic. (Hellblazer issue 258, 2009)

Decades later, while John Constantine was consulting with Epiphany about a way to resurrect a murdered friend, Terry walked in and told him in no uncertain terms not to make any passes at his daughter. Epiphany was later put into a coma by their dabbling with the resurrection spray. Realising he was in trouble, Constantine faked his own death but Terry was not convinced. He blew up John's local pub, The Granby, and kidnapped Chas to get to him. John handed himself in and was almost murdered by Terry until he entered the sleeping Epiphany's mind. There he discovered that she had created a dreamscape that allowed her to live forever in the last happy moment of her life: before Terry sent her off to alchemy school. However, John was able to convince her to wake up. (Hellblazer issue 258 and 260, 2009)

Over the coming months, John and Epiphany grew ever closer, with John eventually proposing marriage. Around this time, Terry - not knowing about John's relationship with his daughter - asked John to help him deal with some Afghan gangsters who were giving him trouble in a turf war. John turned him down, setting Terry on edge, and when the gangster found out that Epiphany was engaged to John he decided to kill the magus. John turned the tables with a little magic and then made a bargain with Greaves: he'd deal with the Afghan problem in exchange for Greaves allowing his daughter to be married. Terry did his part, and his boys were able to deal with a brief wedding invasion by the Afghans (who were possessed by the demon Nergal at the time). (Hellblazer issue 273-Hellblazer issue 275, 2010-2011)

By the end of the series, one of Terry's men shot and killed Constantine when he announced that he wanted the magus dead (though he didn't actually meant it). Terry tracked down the killer and delivered him to Epiphany to be killed. Later, the First of the Fallen has taken interest in Terry after deciding that his experience in organized crime would make a good addition to Hell. As such, the First and John finally step aside their enmity and joined forces to trick Terry into becoming the First's property, which succeeded.

Retrieved from "https://hellblazer.fandom.com/wiki/Terry_Greaves?oldid=10738"
Community content is available under CC-BY-SA unless otherwise noted.