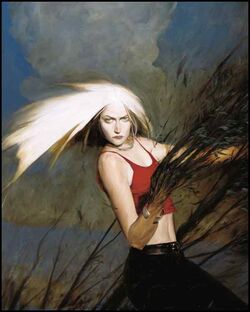 Tefé Holland is a human elemental of Earth, the daughter of Swamp Thing and Abby Holland. Her biological father however, is John Constantine, whom Swamp Thing possessed in order to use his body to impregnate his wife.

Before Tefe came into being, she originally came from a spirit known as the Sprout. Swamp Thing took it and gave it a body in the form of Tefe. Due to Constantine having the demon Nergal's blood in his veins at this time, Tefe is also part demon.

Tefe is the first of a long line of Human Elementals that have the power to both control plant life (like her father) and flesh. As the elemental of the Rot, she also gains the power to control decay.