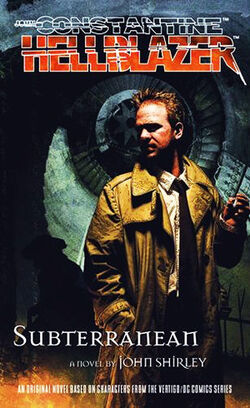 Tonsell-by-the-Stream, a sleepy little village outside of London, is suddenly swallowed down into the earth through the hellish machinations of an ancient, ominous force. At the behest of an extraordinary supernatural agent -- and in exchange for the life of his best friend -- down-and-out and amoral occultist John Constantine must venture deep into underground shadows to investigate this cataclysmic occurrence. But unbeknownst to Constantine, something beyond his worst nightmares awaits below -- the deadly and phantasmagorical realm of the Sunless . . . a terrifying world where the Gloomlord rules over all with a sadistic and merciless hand, and Tonsell-by-the-Stream was only his first target on the surface world. . . .

Retrieved from "https://hellblazer.fandom.com/wiki/Subterranean?oldid=9311"
Community content is available under CC-BY-SA unless otherwise noted.