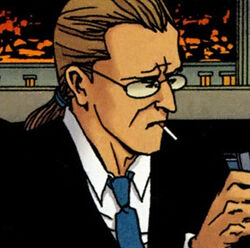 Stevie is a gangster and one of Terry Greaves' right-hand men. He is usually seen partnered with Cuts and first appeared in Hellblazer issue 260

Stevie is a wiry man with a long brown ponytail, sunglasses and a suit. He's generally shown to be a stone-cold gangster, but also to be unnerved by magic.

After John Constantine accidentally rendered the daughter of gang boss Terry Greaves catatonic, Stevie and Cuts were sent to his flat to collect him for 'questioning'. Stevie was initially worried about entering John's flat, unlike the fearless Cuts. However, when they broke the door down they found Constantine dead. This turned out to be a ruse on John's part and they eventually managed to bundle him down to Terry's cellar where Stevie, Cuts and Terry got ready to murder him until he talked his way out of it. (Hellblazer issue 260, 2009)

John eventually hooked up with Terry's daughter, but Terry - being rather protective - decided that he'd rather have Constantine dead. He went around to John's flat with Stevie and Cuts to do him in, but as soon as Stevie kicked the door open the three were hit by a spell that turned their guiltiest secrets into hallucinations. Stevie's was so traumatic that he had a minor heart attack and had to he taken away in an ambulance. (Hellblazer issue 274, 2011)

Terry and John made up after this - well, kind of; Terry gave John permission to marry his daughter so long as John helped him out with some Afghan opponents. To ensure that they wouldn't spoil his daughter's wedding day, Greaves paid them off, with Stevie accompanying him to the meeting. Stevie later oversaw security at the wedding - including getting into a knife-fight with a possessed Afghan gangster. (Hellblazer issue 275, 2011)

Retrieved from "https://hellblazer.fandom.com/wiki/Stevie?oldid=7018"
Community content is available under CC-BY-SA unless otherwise noted.