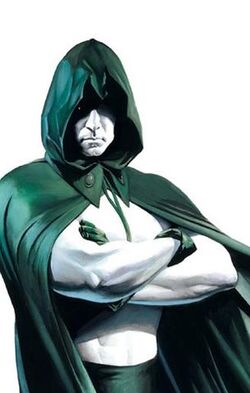 The Spectre is a cosmic entity and the physical embodiment of God's vengeance on Earth. Permanently bonded to a human soul, he uses his incredible divine powers to punish the truly wicked, usually ending his victim's lives in creative and ironic ways. His existence is in response to the failure of Eclipso, the spirit of God's wrath that turned completely malevolent and evil. Jim Corrigan serves as the host of the Spectre.

John Constantine meets him in Constantine #2 when he tries to kill Constantine for all the innocents he has gotten killed, one of them was actually the Spectre's friend. John manages to make him back off by saying that if he dies now, many others will die as well since he's on the mission to stop Mister E's taking control of a powerful occult artifact. The Spectre then relents and leaves John be.

Spectre and John Constantine met each other again in Injustice: Year Three as enemies during Superman and Batman's war

Retrieved from "https://hellblazer.fandom.com/wiki/Spectre?oldid=10679"
Community content is available under CC-BY-SA unless otherwise noted.