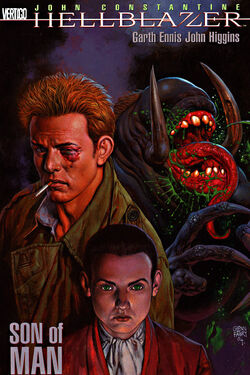 Son of Man collects issues 129-133 of the Hellblazer series.

A new trade paperback collecting Hellblazer #129-133, written by Preacher co-creator Garth Ennis with art by War Story's John Higgins. John Constantine's pulled a lot of shady stunts over the years, but perhaps none as bad as the time he "resurrected" organized crime boss Harry Cooper's five-year-old son, Ronnie. Now, 15 years later, he's got to deal with the ungodly consequences of his actions as the now-adult Ronnie prepares to bring an unprecedented evil into the world.

(Issue 129-133) When Chas runs in covered in blood and holding a gun, John thinks it can't get any worse. It does. Soon he's contending with crooked cops, terrifying gangsters and a monstrous link to his own past that could set London ablaze.

Retrieved from "https://hellblazer.fandom.com/wiki/Son_of_Man?oldid=10242"
Community content is available under CC-BY-SA unless otherwise noted.