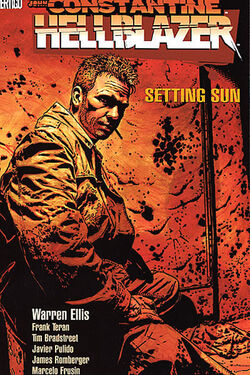 (Issue 140) In a cramped room in a run-down house, two men spent eight days being tortured to death. The officers sent in to take the killer turned on each other. Now the killer is waiting, surrounded by blood and body parts. And it's John Constantine's turn...

(Issue 141) David Niles is a journalist tracking 'the crib', which is said to hold the still-living, aborted foetus of the anti-Christ. But a terrifying killer is taking down everybody associated with it, and his name is... John Constantine?

(Issue 142) A ghost that refuses to move on reveals a horrifying history of experimentation in WWII Japan.

(Issue 142) In this short story, a drunken Constantine recalls the ghosts of girlfriends past.

(Issue 143) The terrible truth about occult London is revealed to a conspiracy theorist - but can he handle it?

Retrieved from "https://hellblazer.fandom.com/wiki/Setting_Sun?oldid=10248"
Community content is available under CC-BY-SA unless otherwise noted.