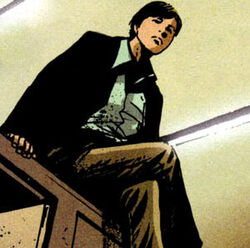 Saul Constantine is, along with Maria and Adam, one of three children conceived by John Constantine and the demon Rosacarnis. He first appeared in Hellblazer issue 200.

Despite being demon (or possibly half-demon; his exact status is unclear), Saul takes the form of a young man in his late teens or early 20s. He thinks nothing of slaughtering dozens of John Constantine's defenceless friends, and seems to take particular delight in hypnotising, or otherwise mind-controlling, people into murdering each other.

Saul was conceived, born and grew up in a pocket dimension created by his mother, Rosacarnis, as part of a scheme to conceive three children with John Constantine who would then know him and his life well enough to destroy him. This was all to get revenge on John for killing Nergal, Rosa's father. In this alternate dimension Rosa took the form of Zed and married John, with whom she lived in a mansion in the English countryside and investigated strange phenomena worldwide. (Hellblazer issue 200, 2004)

Not much is known about Saul's 'youth' in the bubble dimension, but we do know that in this alternate world he, John and 'Zed' acted as a family to investigate strange events around the world (though John had recently retired, handing over the reins to his niece, Gemma). Saul also secretly conducted experiments on both dryads and Swamp Thing to gain access to, and torture, The Green. When John found this out he tried to stop Saul, but was drowned in a pond, pushing him into another parallel dimension and another false history. (Hellblazer issue 200, 2004)

Saul and his siblings, Maria and Adam, under orders from Rosa, then began a wholesale slaughter of John's friends and acquaintances. Saul attempted to kill Gemma by hypnotising her boyfriend into drugging and mutilating her, but Gemma turned the tables by swapping their drinks, knocking out the boyfriend and allowing her to smash his knees in with a hammer. Saul then warped the mind of John's brother-in-law, Tony Masters, and made him strangle John's sister Cheryl to death. Tony later came to his senses and, racked with grief, killed himself. (Hellblazer issue 202-Hellblazer issue 205, 2004-2005)

John went to Hell to reclaim his sister's soul, which had been taken from her body at the point of death. There, he encountered his children once more, as well as Rosa and her father, Nergal. A tense stand-off was broken by The First of the Fallen, who killed Nergal, Rosa, Saul and Adam, reducing the latter two to ash. (Hellblazer issue 212, 2005)

Saul is a very powerful mage with both an array of mystical and psionic abilities.