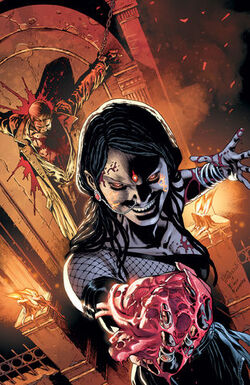 Sargon the Sorcerer is the name of a lineage of powerful wizards in the DC Universe and serves as enemies to John Constantine.

The first Sargon was John Sargent, a magic-user and vigilante in the Golden Age of Comics. In his civilian identity he's a stage magician, passing off his legitimate magical powers as illusions. John Sargent would later be killed during the Crisis on Infinite Earth as he and other magicians such as Zatanna, Zatara and John Constantine tried to fight the Shadow Creature. Sargon died heroically as the creature's power incinerated his body.

John's grandson, David Sargent, became the new Sargon the Sorcerer in the modern age. At some unknown point in time he became an enemy of John Constantine. Although it isn't shown in the comics, it was revealed that John tried to spy on Sargon once with the help of a telepath named Fengis. David would later be killed helping Zatanna fight a large magical war caused by Neron.

The New 52 relaunch of the DC Universe introduced a new Sargon by the name of Jaimini Sargent, the daughter of David, and first appeared in Constantine #1. She is first revealed as an enemy and sexual interest of John Constantine, and an ally to Mister E (who's been turned into a villain in the reboot). She later betrays Mister E in favor of Constantine, and even tried to recruit John to the Cult of the Cold Flame.