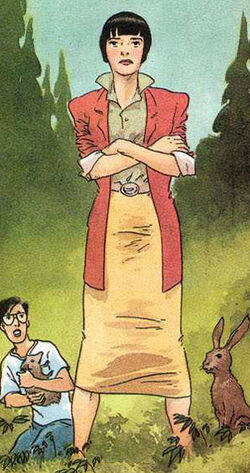 Rose Psychic (b. circa 1899) is a powerful magus who uses her powers for good. She and her lover, Doctor Occult, share the same body but can only manifest one at a time. As a result, they are only able to touch one another when separated from the physical realm (such as being inside another person's psyche). She sometimes goes by the name of 'Rose Spiritus'.

Although she was born around 1899, Rose still appears to be in her 40s, and has done so for decades, having attained immortality in the 1940s. She is a dark-haired Caucasian woman who dresses in the fashion of the 1930s, and has her hair in a 1920s flapper-style bob cut.

Rose was originally born to a god-fearing American couple in 1899, but was taken from them as a baby by a Satanic cult who intended to sacrifice her on the eve of the new century, along with another, male child. They were saved by Zator, a disciple of a supernatural group named The Seven, who spirited them away to The Citadel of the Seven. There, they learned the ways of magic and grew attracted to one another - although The Seven forbade any sexual encounters between the two. Upon reaching puberty, they were given the names of Rose Psychic and Doctor Occult, and sent out into the wider world to battle evil.

They ended up in New York in the 1920s, where they opened up a supernatural detective agency and battled various dangerous foes. During World War II they joined the superhero group The All-Star Squadron, which fought all manner of unearthly threats to America and the world. In 1945 Doctor Occult sacrificed himself to stop a creature known as The Stalker. To save him, Rose bonded his soul with hers. Since then they have lived in the same body, unable to both exist in the physical realm simultaneously. Another explanation has Rose dying and being bonded to Occult, but is most likely apocryphal.

In the early 1990s Occult/Rose, Mister E, The Phantom Stranger and John Constantine - sarcastically referred to by the latter as 'The Trenchcoat Brigade' because of the characteristic coats that the men all wear - joined together to introduce Tim Hunter, potentially the world's most powerful mage, to the world of magic, and also to encourage him to use his talents for good. Rose (and Occult) took Tim to the lands of Faerie and The Dreaming. (The Books of Magic minseries issue one-four, 1991)

The Trenchcoat Brigade joined forces again in 1999, when Pyotr Konstantin, an ancestor of John Constantine, accidentally caused the end of the world. Occult helped the team defeat the cancer god M'Nagalah, but not before becoming trapped in the mind of Mister E, where he saw some of the crusader's dark past. He was about to relive E's blinding by his father when Rose appeared to him and told him that he was in a dream. With her help, he was able to escape and they shared one last embrace before returning to the physical world. (The Trenchcoat Brigade issue one-four, 1999)

In 2008 Hell was thrown into chaos due to an uprising; in the subsequent battle for control, Rose's soul was pulled out of the body she shared with Occult. He ventured into Hell to save her, but she elected to stay there to help the souls of the damned. This story took place in the DCU, not in a Vertigo comic, so whether it applies to the Rose seen in The Books of Magic and The Trenchcoat Brigade is unknown. ([Reign in Hell issues one-eight, 2008-2009)