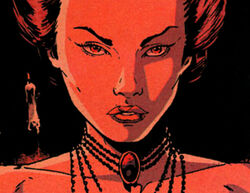 Rosacarnis is a demoness and the daughter of Nergal. She first appeared in the guise of a little girl in Hellblazer issue 194.

As part of her demon nature, Rosacarnis is able to take on any form she pleases; nevertheless, her standard form appears to be that of a tall, dark-haired Caucasian woman. Her other primary appearance is that of a little blonde girl, which she used to catch John Constantine off guard upon meeting him.

As a person, Rosacarnis is as manipulative and vicious as her father. She is coldly calculating and will cut down without a thought anyone or any thing that gets between her and her target, apparently going so far as to have her own weakened father killed (albeit temporarily) in order to maintain her grip on the family's estate in Hell.

The details of Rosacarnis's youth are unknown, except that her mother died when she was very young. It is known that she was already alive in 1988; she watched as her father, Nergal, welcomed The First of the Fallen to their castle in Hell; there, The First expressed his considerable unhappiness at The Resurrection Crusade's plan to impregnate a human, Zed, with a new messiah (these events took place shortly prior to Hellblazer issue one). Before he left for Earth, Nergal took Rosacarnis down to a cellar, where he was keeping Eryme, a servant. He had heard Eryme singing to Rosa while she brushed her hair, in order to comfort the young demon after the loss of her mother. Nergal warned Rosa that she should not show her weakness to those beneath her, and had her stab Eryme to death. He then left for Earth, leaving his butler, Druoth, in charge of Rosa. (Hellblazer issue 209, 2005)

Nergal was betrayed and sent back to Hell by the human agent she was using on Earth - one John Constantine. For his failure, The First of the Fallen sliced Nergal into pieces, then threw his bones out to bleach in Hell's acidic air. News of his death was delivered to Rosacarnis by Druoth, who said that she would become the new leader of the castle, but before she could take over he had one more duty that he had sworn to Nergal to perform. She told him to do it and he did: he slapped her across the face before warning her not to trust anyone claiming to be her friend. He then swore himself into her service; appreciating his dutiful nature she decided to keep him around as her steward, but had him flogged as punishment for hitting her. (Hellblazer issue 209, 2005)

Druoth then warned Rosa that her uncle, Sterocax, would be coming to claim the lands as his own. This would prove especially troublesome as his body, stolen from the Duke of Lethe, was completely impervious to almost any force. But Rosa had a plan. She invited her uncle to the castle and asked him to take control of the land while she grew older. To celebrate the transfer, a feast was held, with entertainment provided by live human beings, brought bodily down to Hell. His lust for human flesh inflamed, Sterocax attacked and devoured the humans - as Rosa knew he would. The poison that had been injected into their bodies knocked him unconscious. At that moment her soldiers struck, killing Sterocax's guards; she then had her uncle's body interned in a pool of poison to keep him permanently unconscious. (Hellblazer issue 209, 2005)

Over the years Rosa kept an eye on John Constantine, the man that killed her father, and thought about The Resurrection Crusade's plan to make a new messiah. She decided that, once she had grown to adulthood, she would use Constantine to make demonic messiahs of her own - and destroy him in the process. (Hellblazer issue 209, 2005)

Unbeknownst to Rosa, her father was not truly dead. Over years he managed to grow his flesh back, eventually clawing out of his shallow grave with most of his bones exposed and his flesh tattered and misshapen. Nergal returned to Rosa and claimed sovereignty. Rosa, either not believing him or wanting to retain control of the lands, had him destroyed once more, forcing him to regrow his body all over again. (Hellblazer issue 210, 2005)

In 2004 Constantine was rendered amnesiac and Rosa finally saw her chance to put her plan in action. She appeared to him first as a little girl, getting close to him only to frame him for murder. Terrified, Constantine went on the run and encountered a serial killer named Peter Gill, from whom he went into hiding. Rosa appeared to him as an adult and offered to return his memories - and thus the skills with which to defeat Gill - in exchange for one day of his life, but he turned her down and walked away. It was only later, after he was about to be burned at the stake by a crazed cult led by the magician Ghant, that he accepted Rosa's offer. (Hellblazer issue 194-199, 2004)

The one day of Constantine's life turned out to be longer than expected: Rosa trapped him in three bubble realities in which they conceived three different children: Adam, Saul and Maria. The kids grew up to be five, twentysomething and 14, respectively, and upon entering the real world immediately began killing Constantine's friends and family. They then returned to Hell, where Rosa - sensing that Maria was beginning to doubt her purpose in life - forced her to 'kiss' a blade, cutting open her lips in a punishment similar to the ones Rosa's father would inflict on her. (Hellblazer issue 200-205, 2004-2005)

One of the victims was Constantine's sister, Cheryl, whose soul was wrongly taken to Hell. Constantine entered Hell to confront Rosa and get it back, teaming up with a revived Nergal on the way. Nergal managed to take over the body of his brother, Sterocax, with the intention of taking back his throne. A tense stand-off between Rosa, John and Nergal took place until The First of the Fallen, growing weary of the whole thing, killed Nergal, Saul, Adam and Rosa. (Hellblazer issue 206-212, 2005)