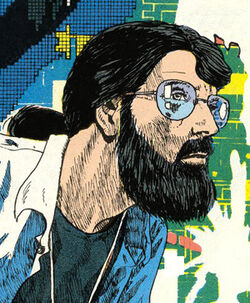 Ritchie Simpson is a friend of John Constantine who subsequently became a demon. His first appearance was in Hellblazer issue seven.

In his first appearance, Ritchie Simpson is a thirty-something, bespectacled male with black hair in a ponytail and a black beard. He has an easygoing attitude although he's not impressed by John's dismissal of his technological - and magical - abilities.

After his transformation into the first techno-demon, Simpson takes a glowing, neon-like humanoid form, crackling with electricity. There are elements of his human shape there, however, including a beard and what may be glasses.

Ritchie's early days are unknown. However, by 1979 he had become friends with John Constantine and, as a pioneer in quantum magic, accompanied him on a visit to The Casanova Club, owned by an amateur mage named Alex Logue. There they found the bodies of Logue and his followers, torn to shreds by a demon named Norfulthing, which had been summoned by Logue's daughter. The resulting events left most of the group scarred; Ritchie arguably got away with the least damage. (Hellblazer issue 11, 1988)

Nine years later John asked Ritchie, who was then working night shifts at a breakfast cereal factory outside London, to help him track down the headquarters of Christian cult The Resurrection Crusade. Ritchie used the factory's powerful computer to track town the Crusade's money trail to their main server. Ritchie got the location and passed it on to John, but then tripped a nasty magical trap that burned his body to a blackened skeleton. John, unable to help his friend, quite literally pulled the plug on him. (Hellblazer issue seven]], 1988)

But Ritchie didn't die; his consciousness, still alive, got in touch with John through a gas bill, leaving a number to call him on. John did so and Ritchie arranged for a special computer to be sent to him that would allow his consciousness to be downloaded into a new body. John agreed, but only if Ritchie would help him deal with Nergal. Ritchie did so, uploading the demon's consciousness to the digital plane alongside John's, where John tricked it into destroying itself. (Hellblazer issue 12]], 1988)

When he tried to return, however, John discovered that Ritchie had taken over his body. John convinced him to enter Nergal's body instead, but upon doing so Ritchie underwent a transformation into a new kind of technological demon. Ritchie mused about whether he would use his newfound power for good or evil, but before he could decide Agony and Ecstasy, Hell's law enforcers, dragged him into the inferno to learn how to become a true demon. (Hellblazer issue 12, 1993)

In the pilot episode of the Constantine TV series, Ritchie Simpson is played by Jeremy Davies. He is portrayed as an academic at Ivy University and speaks with a Southern American accent. Like his comics counterpart, he was present at the failed exorcism in Newcastle. When John meets him again, he is using prescription drugs to cope with his guilt. He is reluctant to have anything to do with John, but John blackmails him into assisting him by hacking into the Atlanta power grid.