Start a Wiki
Rick the Vic 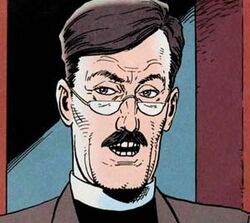 Rick the Vic is a reverend of the Church of England and a friend of John Constantine. His best friend is Header. His first appearance was in Hellblazer issue 63.

Rick looks very much like the stereotypical British vicar: grey hair, half-moon spectacles, a neatly trimmed moustache and sensible clothing. And indeed, his stiff upper lip attitude, sardonic humour and habit of drinking sherry show that he's rather traditional on the inside too. But Rick has a dark side: while he firmly believes in and worships God, he takes particular delight in being sacrilegious, including feeding angel semen to his bimbo girlfriend Betsy. He also once held a combined black mass/Sunday morning service after a bet with the Pope.

Rick and John already knew each other by 1982, when the magus ran into trouble with gangster Harry Cooper, who demanded that John resurrect his son - an impossible task. Instead Rick, John, Header and Brendan Finn summoned a demon, bound it to their will and inserted it into the child's body. (Hellblazer issue 130 and 132, 1998)

The following year Brendan and John met up with Jerry O'Flynn to arrange a shady deal. Rick and Header were there too, but only to watch football on TV. (Hellblazer issue 76, 1994)

One year after that, Constantine is dragged to Hell by a vengeful ghost. John made a deal to get out of the inferno, but not before Rick had officiated his funeral. (Hellblazer issue 77, 1994)

Rick and Header also attended John's fortieth birthday party, during which Rick offered to get a foreskin bible in exchange for 'the usual' payment. A few weeks later the exchange was made: the bible for a jar of angel's semen. (Hellblazer issue 63-64, 1993)

One year on, Rick received some bad news when John called to tell him that Header had been shot dead during a raid on The Caligula Club. Rick went to pray for his friend's soul. Two days later The First of the Fallen came for Rick to find out where John was keeping the heart of the archangel Gabriel. Rick tried shooting The First down, but when he proved impervious to bullets he turned the gun on himself. He awoke to find himself in Hell - condemned for the mortal sin of suicide - with The First waiting for him. Crying, Rick told the demon that Gabriel's heart was in the care of Nigel Archer. (Hellblazer issue 78, 1994)

Retrieved from "https://hellblazer.fandom.com/wiki/Rick_the_Vic?oldid=10812"
Community content is available under CC-BY-SA unless otherwise noted.