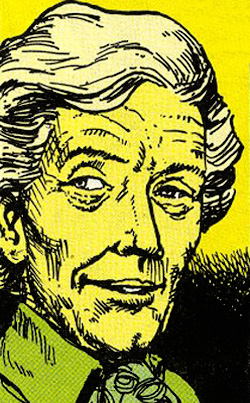 Ray Monde is an English shopkeeper and a friend of John Constantine, for whom he finds newspaper clippings about strange occurrences that might interest him. His first appearance was in Hellblazer issue three.

When first introduced Ray is around 50 or 60 years old, well-groomed and urbane. Ray is gay and, in Constantine's own words, 'camp as Christmas'. However his lover, 'Sergeant Bill', died in the Falklands War in 1982 and the strictly monogamous Ray was too heartbroken to settle down with anyone else.

Ray is a kind and gentle soul with a passing interest in the occult, although his dabblings never went any further than finding unusual events in newspapers for John to investigate.

Ray and John met in the 1960s, when John had first moved down to London. Ray would later recall John being 'such a strange young man'. As John grew older Ray found himself attracted to him, but being in a monogamous relationship with 'Sgt Bill', a navy officer, he never made a move. (Hellblazer issue seven, 1988)

Ray's relationship with Bill came to a sad end in 1982 Bill was burned to death aboard his ship, HMS Sir Galahad, during the Falklands War. Even worse, Bill had contracted HIV at some point prior to his death and given it to Ray, though it wouldn't develop into full-blown AIDS until the late 80s. (Hellblazer issue seven, 1988)

After John was incorrectly believed to be dead following a botched exorcism, Ray was one of several people who attended his funeral. (Hellblazer issue 77, 1994)

In 1988 Ray contacted John with a tip on a new mystery: a group of yuppies found dead in mysterious and bizarre circumstances throughout London. His interest piqued, John investigated and found a stock market dealing in souls.(Hellblazer issue three, 1988)

Later, after John's then-girlfriend, Zed, became targeted by both The Damnation Army and The Resurrection Crusade, John took her to Ray's for safety. While John was out trying to find out what was happening, Crusaders broke into Ray's flat, kidnapped Zed and beat Ray to Death. (Hellblazer issue six-seven, 1988)

Ray made a posthumous appearance to John after the magus was infected by Nergal's demonic blood. Ray's ghost pleaded with John not to let the psychic distress caused by the blood drive him into despair, although whether the ghost was truly Ray or just a hallucination was deliberately vague. (Hellblazer issue nine, 1988)

Ray later appeared in an unspeaking role as a ghost in a bar run by Death. (Hellblazer issue 120, 1997)

Retrieved from "https://hellblazer.fandom.com/wiki/Ray_Monde?oldid=6987"
Community content is available under CC-BY-SA unless otherwise noted.