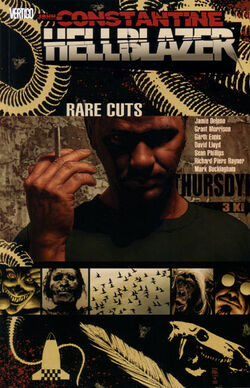 Rare Cuts Collects issues 11, 25, 26, 35, 56 and 84 of Hellblazer, along with the John Constantine timeline from Vertigo Secret Files: Hellblazer.

To help celebrate the release of the Warner Bros. Pictures film Constantine in theaters in February, this January sees the release of this special trade paperback collection showcasing this enduring icon of horror and magic! Rare Cuts is a treat for longtime readers and newcomers alike, assembling six issues of John Constantine: Hellblazer that have never before been collected. Created by some of the most popular and critically acclaimed writers and artists in comics, the issues featured include: #11, which relates the horrifying events of Newcastle, 1978, that ended with an innocent girl's soul condemned to Hell and Constantine confined to an asylum; #25-26, in which new weapons testing goes awry and looses terrible psychic impulses upon a dying northern town; #35, which tells a tale of Constantine's rough-and-tumble childhood and the beginnings of his unique skills; #56, an object lesson in the perils of narcissism and doing deals with demons; and #84, which reveals the origin of Constantine's friendship with his best mate Chas. Also included in this trade paperback are informative pages from VERTIGO Secret Files: Hellblazer #1.

Newcastle: A Taste of Things to Come

(Issue 11) On the run from the demon Nergal, John revisits the site and memories of his most soul-crushing, sanity-rending defeat.

(Issues 25-26) Experiments at a site used to detect nuclear attacks on Britain unleash the dark heart of a dying town. Can Constantine stop things before it all goes horribly wrong?

(Issue 35) One of Constantine's formative childhood experiences is brought to light, as the young boy discovers how close the human soul is to eternal darkness.

This is the Diary of Danny Drake

(Issue 56) Is Danny Drake just a madman on the London Underground or has he been touched by something darker? And can Constantine work out the riddle before a baby dies?

In Another Part of Hell

(Issue 84) The sick and twisted origin of John and Chas's friendship is revealed in all its horrible, poo-flinging, monkey-filled, matricidal weirdness.

Retrieved from "https://hellblazer.fandom.com/wiki/Rare_Cuts?oldid=10245"
Community content is available under CC-BY-SA unless otherwise noted.