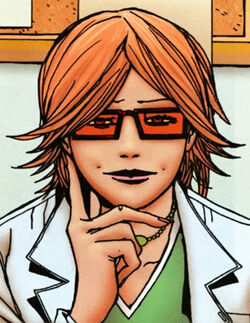 Phoebe Clifton-Avery is a former lover of John Constantine. She first appeared in Hellblazer issue 251.

When first seen, Phoebe is in her 30s. She has red hair and regularly wears red-tinted spectacles and generally sensible clothing.

Phoebe grew up in an upper-class family and, like her father before her, became a doctor. Although her interests are more mundane than Constantine's and she has spent much of her life following the path laid out for her by her family, Phoebe harbours a rebellious and passionate spark in her soul. She also believes strongly in her own dignity and will refuse to deal with anyone whom she feels has wronged or manipulated her.

Phoebe was born into an upper-class family in Middle England. Like her father, Robert, she became a doctor and began working in London. She followed the plan that had been laid out by the expectations of her family and was ready to marry a urologist from Brighton until she met Constantine at a bar where her engagement party was being held. On the spur of the moment she slept with him and broke off the engagement. (Hellblazer issue 259, 2009)

Her relationship with Constantine was extremely close and she told him almost everything about her, failing to mention the abortion that she'd had years before. Unfortunately a spell of Constantine's backfired, causing a ghostly child-thing to appear in her home. Constantine destroyed it and convinced her that she'd had a nightmare, until she found another one in her closet. Upset by the way that Constantine had lied to her, Phoebe broke off the relationship. (Hellblazer issue 251-253, 2009)

She next met Constantine after he was incapacitated by an addiction to the skin of a demon named Julian and admitted to her hospital. She cared for Constantine but reaffirmed that their relationship was off. (Hellblazer issue 254-255, 2009)

John tried to win her back by giving her a bottle of wine dosed with a love potion created by Epiphany Greaves, but Phoebe correctly guessed that his goodbye gift was something suspicious and gave it to her friend Aisha to test. Guessing it was some form of date-rape drug, Phoebe pretended to be under the influence to buy some time and slept with John once more. When it was confirmed by John that the wine contained a love potion she was appalled. Despite this, she helped Constantine go cold turkey after he stopped taking Julian's skin. Unfortunately, John had also dosed Julian with the love potion as a way of keeping the demon off his back and, fearing that he would lose John, Julian murdered Phoebe. Constantine stopped her body from decomposing with a spell and set his mind on resurrection. His attempt to bring her back failed, however, because his soul was not pure. (Hellblazer issue 256-258, 2009)

Constantine cooked up a spell to speak to Phoebe and discovered that her soul was somehow bound to Hell. (Hellblazer issue 259, 2009)

After defeating a demon in Mumbai, Constantine was finally allowed to speak to Phoebe again, though her soul was channelled through Epiphany's body. Phoebe said that Constantine needed to free her soul and not keep it bound to Earth. Recognising this, he allowed her to pass on safely to the afterlife. (Hellblazer issue 264, 2010)