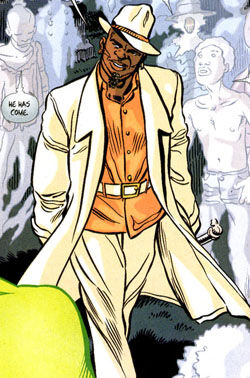 Papa Midnite appearance is mutable, and he has taken two forms during the course of the series. The first, seen in the main Hellblazer series, was that of a bulky, bald man with a penchant for wearing sharp suits during business hours and a grass skirt/white jacket and top hat combo during his rituals. The second, seen in the Papa Midnite mini series, was a slimmer man with a zig-zag beard, white suit and trilby hat. When asked by John Constantine, Midnite suggested that the reason for this change was John had previously only seen what he expected to see - a burly man in a grass skirt - and not what was actually there.

Midnite and his twin sister Luna were born in the 18th century, where Jack's mother schooled him in the art of magic. They later moved to New York City where they took over the home of a white landlord, whom they rendered catatonic and used as a puppet, turning his home into a HQ from which they could sell guns. (Papa Midnite issue one, 2005). However, trouble reared its head when a slave named Cuffee, planning to overthrow white rule in New York, paid Midnite to make a magic powder that would deflect bullets. The powder Midnite gave him was useless, though, and the resulting rebellion was quickly quashed leaving hundreds of slaves dead. As revenge, Cuffee and his friends forced Midnite to decapitate his sister then cursed him to immortality for as long as white men ruled over black men on the American continent. (Papa Midnite issue one-Papa Midnite issue two, 2005)

After communing with the African trickster god Anansi, Midnite put together plans for a new uprising involving Cuffee's son Fortune. Fortune discovered too late that the plan was doomed to failure by design: Midnite hoped that the brutal destruction of the new rebellion would inspire further anger and years of brutality that would eventually lead the black slaves free. Realising that Fortune would tell everyone and destroy the plan, Midnite called upon Anansi to kill him. But Anansi, ever the trickster, turned on Midnite instead and let him be burned at the stake. Fortune then took Jack's still-living body and shipped him off to the West Indies where he would become a slave himself. (Papa Midnite issue three-Papa Midnite issue five, 2005)

Jack's movements in the intervening years are unknown but what is known is that he continued to practice magic, using his sister's skull to talk to the dead. After she moved on he began to acquire the heads of other 'sisters'. One such girl was Cedilla, a girl in Trench Town, Jamaica. He convinced her brother, Linton, to kill her and sever her head then branded her soul in such a way that she would be sent to Hell, where she would provide information for him. (Hellblazer issue 71, 1993)

Eventually he moved back to New York where he quickly took over the criminal underworld, running his operations from within a nightclub. In 1983 he tried to sell The Ace of Winchesters to John Constantine through a man named Zeerke but when Zeerke bumped the price up John stole it. (Hellblazer issue 76, 1994) Also, at some point prior to 1988 Constantine stole $50,000 from Jack. (Hellblazer issue one, 1988)

Nevertheless, Midnite helped John when a hunger demon, Mnemoth, was released on New York in 1988. Midnite used an electric chair from Sing-Sing prison and his considerable magical powers to help John summon the demon and bind it in the body of Gary Lester, where it consumed itself. (Hellblazer issue one-two, 1988)

But when John returned to New York in 1993 and was spotted by Zeerke, Midnite saw his chance to get his own back on John and cast a spell on him that sent his soul to Hell. However, while he was down there Constantine found Cedilla and freed her from the spell that had trapped her there. Furious, she returned to Earth and compelled Midnite to throw himself off the 86th floor of the Empire State building. (Hellblazer issue 72-75, 1993-1994)

Despite having burst all over the street (and several passers by), Midnite could not die, and so his body reformed itself. He returned to his illegal business until 2004, when the ghost of Fortune appeared to him and made him revisit his past. The ghost told him to return to his mission of vengeance. At the same time, John Constantine asked Midnite to help him in his battle against The Shadow Dog but Midnite turned him down. (Papa Midnite issue one-five, 2005)

A figure wearing a top hat also made an appearance at the wedding of John Constantine and Epiphany Greaves, although whether it was Midnite or not is unknown. (Hellblazer issue 275, 2011)

main DC Universe so far. In the New 52, he appears as an occasional villain and ally to John Constantine. He appears in both Constantine and Constantine: The Hellblazer. Like in Hellblazer, he is a crime boss and voodo magician who controls New York.