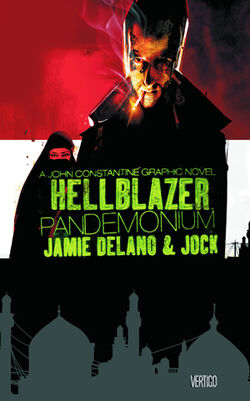 The graphic novel is a self contained story, venturing into the political ground that Jamie Delano is well known for. The story starts with a scene in Iraq, where a small town was bombed. The U.S. Army manages to detain a man said to be responsible. While being interrogated, the man unleashes a supernatural power that kills the soldiers and destroys the camp. In London, a chance encounter with a young Muslim girl leads a curious Constantine to the British Museum. The museum is suddenly bombed but Constantine and the girl manage to escape. Constantine invites the girl to his home when he suspects she is responsible. However, when they arrive, Constantine is taken by the authorities, having been framed for the bombing. Constantine is later handed over to MI6, where they blackmail him to find the real culprit of the bombing, and send him to Iraq to investigate a supernatural entity plaguing the area. Having no choice, Constantine agrees. While in Iraq, the Muslim girl shows up again, introducing herself to a surprised Constantine as Assera Al-Aswari, and is an agent of MI6. She and Constantine drive into an army camp to discuss the events. While on the road, Constantine deduces to her that the place used to be an ancient city, named Kutha, as well as a Sumerian temple. Assera tells him he's right, but also that the no one's been in the place for a long time since the war. They finally arrives in the installation and settles down. As night came, under the cover of darkness, John uses magic to sneak out. He travels to Kutha, where he discovers the city is actually a den of demons, before he is detained by Assera. The next day, John and Aseera visit the mysterious detainee locked away. As John examines him, the detainee turns out to be inhuman. In fact, John deduces that the detainee is a djinn. The camp was suddenly attacked by insurgents, and John is able to trap the spirit inside a bottle. The installation was quickly overrun, but John, Assera, and the djinn escape. They are soon stranded in the middle of desert with no one to contact to. Constantine explains to Assera that Kutha is actually a city whose people worshiped a god named Nergal. Nergal also happens to be one of Constantine's longtime adversaries. John later invites Aserra to sleep with him when night came. The next morning, insurgents appear and kidnap both of them. They are later handed over to Nergal. Nergal welcomes John to Hell, where he begins a monologue explaining that he was collecting the souls of the dead to trap them in Hell, while the djinns were made as workers. Seeing that Nergal is running a casino in Hell, John challenges Nergal to a game of poker for the souls. Nergal and his confidants agree, but if John loses he will find himself "cleaning [Nergal]'s ass with his tongue" for eternity. John cheats his way to victory, and Nergal is forced to free all the souls along with John and Assera. With his mission completed, John returns to London for his end of the bargain. In the MI6 headquarters he releases the djinn and intimidates the MI6 officials to free Assera in Iraq and give her a new life with luxury. Frightened, the officials agree.