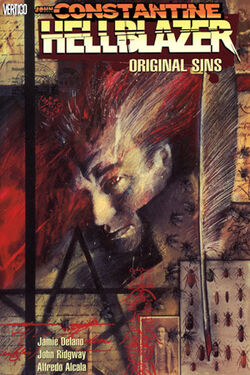 Original Sins is the first volume of the Hellblazer collections and pulls together the first nine issues of the series.

John Constantine is an unconcerned, somewhat amoral occultist with a British working-class background. He's a hero, of sorts, who manages to come out on top through a combination of luck, trickery, and genuine magical skill. The Original Sins collection is a loosely connected series of tales of John's early years where Constantine was at his best and at his worst, all at the same time.

For detailed plot synopses, see the issues' individual wiki pages. Where a storyline spans multiple issues but has no over-arcing title, the title of the first issue is used.

(Issues one and two) Constantine faces down an escaped African hunger spirit in contemporary New York, clashing with Papa Midnite and old friend Gary Lester along the way.

(Issue three) On the eve of the British general election, a string of mysterious deaths put Constantine on the trail of a stockmarket dealing in human souls.

Waiting for the Man

(Issue four) Aided by a mysterious mage known as Zed, Constantine investigates the disappearance of his niece, Gemma Masters.

(Issue five) While investigating the mysterious Resurrection Crusade, Constantine finds himself in an Iowa town that is warping time and space with its prayers.

(Issue six) The Resurrection Crusade start fighting back - and to make things worse, the demon Nergal has arrived on the scene with plans of his own.

Ghosts in the Machine

(Issue seven) Zed is in hiding from the Crusade and Constantine's running his own game with a little help from a hacker-magus. Unfortunately, both of them are blundering into deadly traps.

(Issue eight) Hospitalised and crippled, Constantine discovers that his only way to foil the Crusade is to accept help from Nergal - and betray Zed!

(Issue nine) Drunk, miserable and just turned 35, Constantine finds himself confronted by inner demons, dead friends and his own ghost.

Original Sins was first published in 1993, a time when the trade paperback market was virtually unheard of. Although Garth Ennis's run on the book had made Hellblazer the second-biggest-selling Vertigo series at the time, Original Sins sold poorly. As a result, the next book to be released, in 1994, was the Garth Ennis collection Dangerous Habits.

It wasn't until 2007, after a resurgence of interest created by the film adaptation Constantine, that Delano's run continued to be collected, beginning with The Devil You Know.

Retrieved from "https://hellblazer.fandom.com/wiki/Original_Sins?oldid=10255"
Community content is available under CC-BY-SA unless otherwise noted.