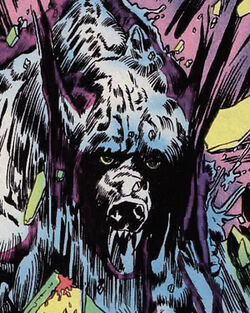 Norfulthing is a demon that was summoned to Earth unconsciously by Astra Logue. It is a creature of pure id and rapes and consumes anything it finds. It first appeared in Hellblazer issue 11.

Norfulthing's physical form is largely similar to that of an enormous white dog, but with a slimy exterior and external organs on its body. It can shift between human-like and quadrupedal form. It also has an enormous penis which it uses to rape its prey. The creature is almost mindless but very powerful, and has a compulsion to maim and destroy everything it can.

It is later revealed when John Constantine returned to the Casanova Club that Norfulthing was actually a primodrial Elemental.

But Nortfulthing wasn't truly dead. Since it's an elemental, it continued to exist and haunt the remains of The Casanova Club (now with a detachable head courtesy of Nergal). However, in the late 2000s a documentary crew, making a video about John's former band Mucous Membrane, broke into the club's ruins. They disturbed Norfulthing and it proceeded to drive them all insane, killing them in various gruesome ways. John, however, was able to bind it again before it could do more damage. (Hellblazer issue 245-246, 2008)

Retrieved from "https://hellblazer.fandom.com/wiki/Norfulthing?oldid=10832"
Community content is available under CC-BY-SA unless otherwise noted.