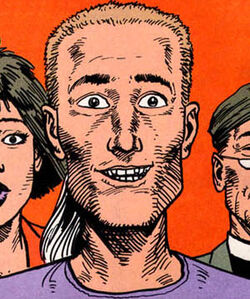 Nigel Archer (b. 1964) is a left-wing political activist, psychic and friend of John Constantine. His first appearance was in Hellblazer issue 53.

Nigel is a scrawny, gangly student whose ambitions to become a radical left-wing journalist and overthrow the political order of the UK are completely outstripped by his actual abilities. Being a psychic and medium himself, he tried to use magic for his own political reason, such as trying once and failed to curse Margaret Thatcher. Nigel is largely cowardly, particularly when Constantine's involved, but will step up to the plate if he thinks there's a chance to take down a figure of power.

John and Nigel met at an undisclosed point prior to 1992, when Nigel's student union bar became haunted. Exactly what happened is unknown, but Constantine was involved in some capacity. (Hellblazer issue 53, 1992)

In 1992 John, who was looking for a psychic to summon up some murder victims for a seance, came knocking on Nigel's door. Nigel was resistant until he discovered that the murderer was a member of the royal family who'd become possessed by a demon in a depraved sex ritual. Nigel helped to summon up the victims, who revealed the name of the demon: Calibraxis. Afterwards, Nigel helped Constantine send the demon back to Hell. (Hellblazer issue 53-55, 1992)

Soon afterwards, Constantine orchestrated the fall of the angel Gabriel and had his heart - his one weakness - torn out of his chest. The First of the Fallen, looking to get hold of the heart, used Nigel's psychic abilities to locate the heart before killing him. (Hellblazer issue 78, 1994)

Nigel made a brief appearance at a bar for the deceased in Hellblazer's 10th anniversary issue. (Hellblazer issue 120, 1994)