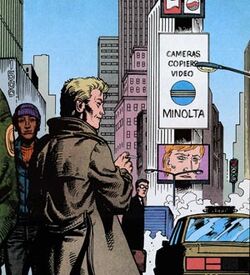 New York City is one of the biggest and most widely recognised cities in the USA. Like all major cities, it is home to magicians - in this case Papa Midnite, who oversees a large chunk of its criminal activity and retains his power through voodoo magic.

Retrieved from "https://hellblazer.fandom.com/wiki/New_York_City?oldid=10695"
Community content is available under CC-BY-SA unless otherwise noted.