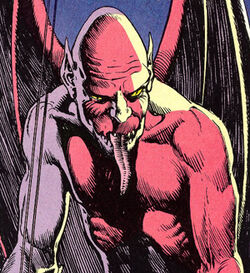 His position as both a demon and god has given Nergal a certain degree of arrogance, hence his inability to ever come to terms with the fact that Constantine has repeatedly bested him. Like John ,Nergal is a manipulator and player of games, but unlike John he also has the brawn to tear his enemies apart.

But demons are notoriously difficult to kill - Nergal even more so than most - and so he returned to Hell to lick his (considerable) wounds. Years later Constantine crossed The First of the Fallen, who declared that he would take the magus's soul. Nergal made the mistake of speaking out against this and so The First returned him to a mortal soul and cut him to pieces, scattering them across the wastelands of Hell. (60, 1992)

But his greatest weapon is his tongue. He is one of the most devious and manipulative of Constantine's foes who orchestrated many of the Earth's disasters over the millenia.

In the Constantine TV series, Nergal was played by Joey Phillips.