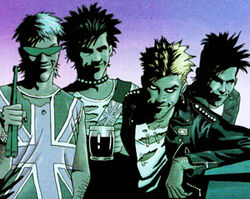 Mucous Membrane (1977-1979) were a minor punk band founded by songwriters John Constantine and Gary Lester. They played all over the UK, most notably at The Casanova Club in Newcastle, but mostly in London. They had one single, 'Venus of the Hardsell' for which a music video was made, but it didn't do well. Mucous Membrane are now largely forgotten, though the band's rumoured connections with the occult have proved to be of interest to journalists and documentary makers.

Constantine and Lester formed Mucuous Membrane in 1977 after seeing The Sex Pistols play live. While Lester was adamant that they were a 'new wave' band they would go on to be remembered as a punk outfit. The band made their debut appearance at The Casanova Club in Newcastle, run by the amateur magician and full-time sex fiend Alex Logue. They would continue to play there over the next three years. (Hellblazer_issue_11)

Most of their gigs, however, were based in London. At one of these gigs John, Chas and Les, the band's bassist, were asked by billionaire SW Manor to acquire a clock that could foretell the future. Knowing that the clock didn't exist, they conned him out of the money instead. (Hellblazer issue 162-163)

Also in 1978 the band raised enough money to film a video for their single Venus of the Hardsell, which was released through the label S'not Music. Unfortunately music videos were a nascent medium at that point and it went largely unseen by most people. (Hellblazer Annual 1) They also managed to blag an interview in the British musical paper NME (New Musical Express). (Hellblazer issue 63)

In 1979 John and Lester, plus a bunch of associates who would become known as The Newcastle Crew, went to collect money from Alex Logue for a gig Membrane had performed in the Casanova Club. Alex's abused daughter, Astra, had summoned up a demon called Norfulthing that had killed Logue and his associates during an orgy. John tried to summon another demon to defeat it but failed to name and bind it properly. That demon, Nergal, kiled Norfulthing and dragged Astra to Hell. This failure sent John completely insane. He was committed to Ravenscar Secure Facility and the band broke up.

After leaving Ravenscar, John went on to become one of Britain's premier occultists. Chas became a taxi driver.

Gary Lester wrestled with a heroin addiction matched only by his interest in the occult. In 1988 he accidentally released an African hunger demon on New York. John and NY voodoo gangster Papa Midnite bound the demon inside Lester, killing them both. (Hellblazer issue one-two) Lester's ghost haunted John for a time (Hellblazer issue two-nine). He then descended to Hell where he became a pet of The Demon Constantine. (Hellblazer issue 208)

Beano also became hooked on heroin and ended up living in a shabby squat. His last contact with John was in 1984 when John cleared a pair of ghosts out of his home. (Hellblazer issue 77) Several years later Beano began to dabble in magic himself; in 2011 he managed to summon The Demon Constantine to Earth and was immediately killed by him. (Hellblazer issue 274.

Mucous Membrane have been largely forgotten by music fans, although the band's connections with the occult (via Constantine and Lester) have made them a cult interest for music fans. As seen in the backmatter of Hellblazer issue one, two and four, journalist Satchmo Hawkins tried - and failed - to interview Constantine for the underground XS Magazine.

Most people's reaction to the music was not positive; even Chas, the band's roadie, said: 'I roadied for practically every bleedin' gig... I head it all. And I thought (they) were friggin' shit.' (Hellblazer issue 77) It's a sentiment that even Constantine shared: 'We were shite, kid. We were bloody awful. But then again, no worse than a lot of others back then.' (Hellblazer issue 246)

In 2008 a US cable channel financed a documentary on the band - one that even the people making it admitted nobody would watch - but Norfulthing, was back again and hiding in the ruins of The Casanova Club, driving the filmmakers all insane. (Hellblazer issue 245-246)