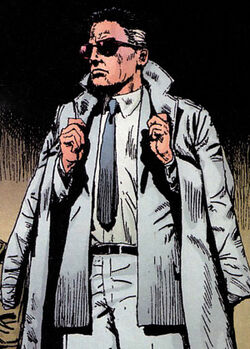 Mister E is a seriously damaged man who has devoted his life to hunting down and destroying evil - although what he constitutes 'evil' may be arguable. He habitually carries stakes, silver bullets and various monster-destroying paraphernalia in his white trenchcoat, to ensure he is never caught unprepared. He first appeared in Secrets of Haunted House #31.

Mister E is a fifty-something Caucasian male who dresses entirely in white. His eyes are scarred and useless, the result of him being attacked and mutilated by his father when he was a child. As a result he hides his eyes behind thick, dark sunglasses - however, while he may appear to be blind, even using a white walking cane (containing a hidden blade), he has an uncanny second sight that allows him to move around as though he can see normally.

Because of the brutality of his upbringing and the harm visited upon him by his father, E's mind is brittle and fractured, and appears to have developed into two distinctive - though perhaps not entirely separate - personalities. 'Erik' is his alter-ego, a kind but troubled man who lives a quiet and modest life alongside a small community of friends in modern-day New York. He shows kindness to all around him, and has no problems dealing with both women and children.

However, in times of stress, or when evil must be combated, he becomes Mister E. This personality has full access to his magical abilities, including the power to move backwards and forwards in time and space, but is also abrasive, venomously misogynistic and psychopathically dangerous towards anyone whom he perceives to be evil. He also shows an enormous amount of Christian zeal, something not displayed by his 'Erik' persona.

Erik grew up in a repressive, abusive religious household where he was forced to learn the Bible by rote, and beaten badly if he displeased his father. Eventually he discovered pornographic pictures of his mother and sister - possibly together - under his father's bed. His dad mutilated Erik's eyes with a sharpened spoon as punishment and Erik, who loved his father despite his many, many failings, repressed the memory, instead coming to believe that his father had blinded him for looking at a pornographic magazine. (The Trenchcoat Brigade issue two, 1999)

Obsessed with evil, and granted the ability to sense it in the world around him, E moved to Boston, where gained notoriety as a historian and a hunter of supernatural creatures like werewolves and vampires. During this time he gained two followers - an assistant named Kelly O'Toole and an amateur hunter named David Neu. (Secret of the Haunted House #31-41)

E lost contact with Kelly and David for reasons unknown, and descended further into madness. He became obsessed with destroying evil wherever it was found, and when he discovered that a young boy called Tim Hunter had the potential to become the greatest mage of his era, either good or evil, E decided to intervene. Along with John Constantine, The Phantom Stranger and Doctor Occult, he agreed to introduce the boy to the world of magic, and to guide him towards the path of good. However, E decided that Tim was too dangerous to live, and took him to the end of time to kill him. There, he was interrupted by Death and Destiny. Death took Tim back to his own time and left E to walk back through eternity step by step. (The Books of Magic issue one-four)

On his way back through time, E was confronted by two beings named The Shadower and The Temptress. These creatures turned out to be elements of his own mind. Aided by The Shadower, he managed to kill The Temptress, restoring some kind of sanity to his psyche. (Mister E issues one-four)

For a time 'Mister E' disappeared and he once more became Erik, a gentle man who swept the streets of New York and helped out his community. However, visions of an impending apocalypse caused by a green-eyed Russian resulted in his Mister E persona asserting itself at night, trying to track down the Russian. Eventually he teamed up once more with 'The Trenchcoat Brigade' - Constantine, Occult and The Phantom Stranger - and helped them destroy the source of the catastrophe, the cancer god M'Nagalah. In doing so, E reconciled himself with his traumatic past, hung up his trenchcoat for good, and once more became Erik. (The Trenchcoat Brigade issue one-four)

Mister E appears as an antagonist in the Constantine series. He is killed by John Constantine during in a magical battle.