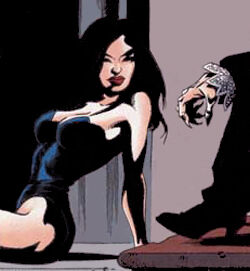 Mary is a vampire. She was shown to be an associate of The King of the Vampires, but later relocated to Gotham City with Darius. She first appeared in Hellblazer issue 68.

Mary is a black-haired vampire who thinks nothing of murdering and draining humans, although she is shown to be less impulsive and violent than Darius and The King of the Vampires.

Little is known about Mary's past, other than that she knows The King of the Vampires and had, prior to meeting him in London in 1993, been hanging out another vampire called Cindy in Isreal. After arriving in London she, the King and the King's lover Darius murdered and drained a man while having sex. (Hellblazer issue 68, 1993)

Afterwards The King headed out and discovered a homeless John Constantine. As that night turned into morning, and the King still did not return, Mary and Darius hid beneath the Earth. Soon afterwards they both felt in their guts that the King had died, though they did not know that Constantine had killed him. (Hellblazer issue 69, 1993)

Darius declared himself the new King and she, despite having previously found his excesses unpleasant, joined him. Six years later, Gotham City fell victim to an earthquake that left it devastated. It was written off by the US Government and declared a 'no-man's land'. Seeing an opportunity to build himself a kingdom, Darius, Mary and at least a dozen other vampires arrived in the city to claim it as their own. When one of their number killed a child, however, hitman Tommy Monaghan and his friend Natt took it upon themselves to stamp out the menace. (Hitman issue 38, 1999)

They tracked Darius and Mary to a church, where Darius offered to let them be his human representatives. They refused and escaped, returning with a rag-tag group of other hitmen to wipe the nest out. After a heated battle, one of Tommy's friends - as per his plan - drove a bulldozer through the side of the church, incinerating every vampire inside, including Darius and Mary. (Hitman issue 39, 1999)