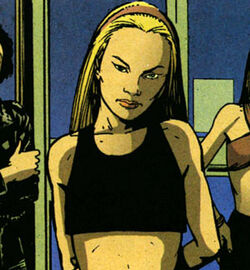 Maria Constantine is, along with Saul and Adam, one of three children conceived by John Constantine and the demon Rosacarnis. She first appeared in Hellblazer issue 200.

Although she is a demon - or at the least half-demon - Maria's instinctive form is that of a fourteen-year-old blonde girl. Like her brothers she thinks little of murdering dozens of people at her mother's command, but unlike them she has enough self-awareness to question both her mother's commands and the false childhood that her mother put her through. There may even be a small nugget of compassion in her somewhere, although it is very small indeed.

Maria was conceived, born and grew up in a pocket dimension created by her mother, Rosacarnis, as part of a scheme to conceive three children with John Constantine who would then know him and his life well enough to destroy him. This was all to get revenge on John for killing Nergal, Rosa's father. In this alternate dimension Rosa took the form of Angie Spatchcock and married John, with whom she moved back to Liverpool and opened a cafe. (Hellblazer issue 200, 2004)

Details about her youth are thin on the ground, but as a child a boy named Oliver tried to rape her and she instinctively used her abilities to burn him to death. This was her first kill. (Hellblazer issue 206, 2005)

By the time she'd reached her mid-teens Maria had developed into a fully-fledged psychopath, rounding up her friends to torture and murder homeless men. Upon discovering this, John broke the pocket dimension and came back to reality - bringing the kids with him. Maria left with her mother and brothers, but before she did so, she slashed John across his left cheek, scarring him for life. (Hellblazer issue 200, 2004)

Maria and her brothers, under orders from Rosa, then began a wholesale slaughter of John's friends and acquaintances. Among Maria's victims was Alba; she also tried to kill Chas Chandler by dropping a truck on him, but he was saved by Nergal, Maria's grandfather, who then used him as a vessel. (Hellblazer issue 202-Hellblazer issue 205, 2004-2005)

Maria tried once more to kill Chas after Nergal had left his body, but doubts about her mission and non-existant childhood, coupled with her interest about a strange presence in Chas's body, stayed her hand. After finding and removing a sliver of her grandfather's essence from Chas, she and her brothers fled home to warn their mother of Nergal's presence. (Hellblazer issue 206, 2005)

After notifying her mother of her grandfather's return, Maria began to question why her mother would continue her war against Constantine - she suggested that Nergal could reclaim his throne and enact his own vengeance and that she, Rosa, Saul and Adam could go away somewhere and become a real family. Rosa, believing that her daughter was becoming weak, forced her to cut her lips open on a knife. (Hellblazer issue 208 and 211, 2005)

Eventually John, Nergal and Rosa confronted one another in Hell, only for The First of the Fallen to intervene. He destroyed Nergal and Rosacarnis. He then gave the children a chance to convince him to spare them; Maria said that she didn't want to keep living if this was what life was like, and the First decided to destroy Adam and Saul and let her live. When he manipulated Cheryl Masters into staying in Hell to share her husband's burden, he told Maria "I hope you were taking notes". (Hellblazer issue 212, 2005) Maria has not appeared since and her location and status are unknown.

Retrieved from "https://hellblazer.fandom.com/wiki/Maria_Constantine?oldid=10751"
Community content is available under CC-BY-SA unless otherwise noted.