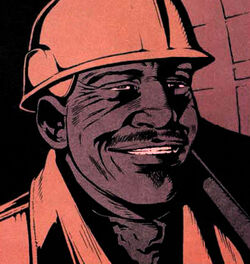 Map (born Ken Ondaate) is a supremely powerful magician who could have been king of the magi but instead elected to live a quiet life clearing up rail lines on the London Underground. He first appeared in Hellblazer issue 135.

Map is a middle-aged black man of average build (although he is sometimes portrayed as being rather slimmer) with short hair and, sometimes, a moustache and soul patch. He also has the ability to move his physical form into another plane accessible by reflections; in these instances only his face is visible in the reflection, although sometimes he is able to project a giant image of his head, three dimensionally, out of the glass.

Once, in Hellblazer issue 137, he physically changed into a humanoid figure with round, red eyes and a hunched back, though still with brown skin and clad in his usual clothing. This appeared to hint at some hidden form, but it may just have been a result of the spell he was casting at the time.

Map is a lone wolf and purposely took up a job cleaning up the rails on London's subway system rather than become the king of the magi that others wanted him to be. In his earliest appearance he is shown to be quiet, but largely cheerful about his life working on the London Undergound, though he can be provoked into murderous rage when racially abused. In subsequent appearances he is rather more taciturn and emotionally distant; it is suggested that London, as a collection of people and places, is more important to him than any individual. Very much a 'big picture' person, Map will not hesitate to sacrifice an innocent life if it benefits the greater good.

Although the nature of Map's magic has never been explicitly stated, it is always linked to locations in some way - particularly London. Uses of his abilities include locating someone using magic; sending a possessed woman to sleep by making her remember her childhood bedroom; calling on the energies of the London Underground train lines to protect him; calling on roads, rivers and other elements of London's geography to increase his power; and swapping the images seen through two windows to trick an enemy.

In Hellblazer issue 223, it was implied that Map's magic is a two-way street; that just as he draws power from London, it can draw it back from him. The exact nature of this - whether 'London' is an actual, conscious entity or an unfeeling, unthinking mass of magic is unclear. Likewise, although he has called upon the spirits of motorways, train lines and rivers, even calling them 'brothers' and 'sisters', it is unclear whether he is speaking to an actual creature (akin to a water nymph) or whether he is anthropomorphising power sources.

Later stories suggest that Map has taken on the mantle of London's ultimate protector, and that he is responsible for protecting the city from all kinds of magical threats.

In his first appearance, Map is seen clearing trash off the rails of the underground line at the Bank station in North London. Constantine says that he has the worst job in the city and Map says it's very much the opposite - he's far happier living a simple life underground than on the surface where 'all those people' want him to be the king of the magicians. It turns out that John got him the job in the first place, and Map repays him by finding the home of Joshua Wright, a nasty magician who raped and murdered John's ex. (Hellblazer issue 135, 1999)

Joshua later sends two racist thugs to beat up Map for revealing his location; Map then calls upon a train, which ploughs through both men, killing them. Map then projects his consciousness out to Constantine and accuses him of manipulating Wright into sending the thugs down there, knowing Map would kill them. John admits that he did, and Map vanishes.(Hellblazer issue 137, 1999).

Map later found himself being pulled by John into a magical turf war in London. He initially refused John's request for help, saying that the conflict had forced him 'underground' to a place 'that doesn't exist so much'. However, John forced his hand by saying that he would side with the sinister Domine Fredericks if Map didn't help free his niece, Gemma, from Fredericks' grasp. Map subsequently swapped the images seen through two windows to protect the target of an assassination attempt by Fredericks, then passed on a message to Clarice Sackville that ended up saving Gemma from a nasty spell. (Hellblazer issue 177-Hellblazer issue 180, 2003)

Domine, unfortunately, had begun a chain of events that resulted in The Shadow Dog, a harbinger of the apocalypse, being unleashed upon the world. Map, along with several other magicians, was called upon by John to summon, bind and destroy the dog. They managed to do so, only to discover that it was actually protecting humanity from the true thread: a monster named The Beast. Infuriated that they had been duped, Map left to prepare for the oncoming storm. (Hellblazer issue 189-Hellblazer issue 191, 2003)

Later, John's friends and acquaintances found themselves under attack by his half-demon children. The eldest, Saul, became the shadows in the London Underground and attempted to devour Map; but Map declared himself 'The Map. The line drawn through the darkness. The thread that shows the way,' and fended off Saul's attack with ease. (Hellblazer issue 202, 2005)

The following year, grieving the loss of his sister, John decided (as an exercise in projecting his own self-hatred) to punish the members of The Tate Club, a gathering place for magicians, for their hubris and arrogance. Map appeared to him and warned him not to do anything stupid, but John went ahead and did it anyway. (Hellblazer issue 214-215, 2006)

Map stayed off John's radar until 2005, when events became so serious that Map had to call in a debt from John (presumably repayment for the Shadow Dog debacle). Something - a force of death and horror - was descending upon London, draining away Map's power and leaving him helpless. It turned out that this was now the focal point of a cycle visited upon the city every few hundred years: if a young man was allowed to detonate a bomb on the London Underground, it would result in the city's residents attacking each other - thus making the city tear itself apart. John helped Map kill the man before he could blow himself up, restoring Map's power. (Hellblazer issue 223, 2006)

Years later, Map discovered that a locked grate had become a focal point for the imaginations of passing commuters; their curiosity and belief had opened a portal had been opened between London and a world composed entirely of urban legends, into which three hapless urban explorers had walked. Map sent John in to fix the problem; though two of the explorers had been killed, John managed to get the third, a girl, to the exit. When he got there, however, John found himself pulled back to reality minus the girl. Map explained that if she had escaped she might have told of what she'd seen, causing the portal to grow even more powerful. John, disgusted, told him where to stick it. (Hellblazer issue 238, 2008)

Map was one of many Vertigo characters to be introduced to the main DC Universe during the DC Rebirth. He made his first appearace in The Hellblazer issue 3. His history as both a railroad worker and a guardian of London is still intact, but he is now portrayed as a mentally-damaged magician due to the years of abuse and information overload he suffered with his powers.