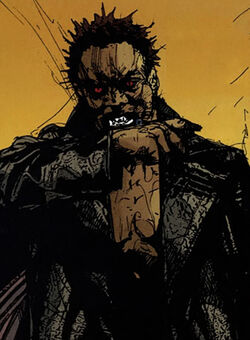 Mako is a blood mage from Sudan. He first appeared in Hellblazer issue 239.

In his first appearance Mako looks to be around 30 years old, with sharpened teeth. While he is apparently human, Mako has red eyes with vertical slits - a sign of his malicious and dangerous nature. He is a merciless killer who take a particular delight in terrifying and torturing his victims before he kills them.

Mako is a master of sympathetic magic - the ability to magically link people to an object and then kill them by manipulating it, (eg, decapitating someone by popping the lid off a champagne bottle) but his main MO is blood magic. He binds the souls of his victims into their bodies, then eats their brains while they're still alive, absorbing their power and memories. His relentless quest for power led him to John Constantine, who he deemed to be the most powerful magician in the world, and whom he hoped to consume and absorb.

Little is known about Mako's life prior to his appearance in the comic, but he apparently spent the preceding years hunting down mages in Sudan. After The Witch Doctor saw his coming in a vision, he placed all of his memories of Constantine in a branch and sent it to the UK. Mako then killed the Witch Doctor and absorbed his memories but, realising that Constantine had been denied to him, headed to the UK himself - commandeering a plane and crash-landing it in a London airport. (Hellblazer issue 239-240, 2008)

Mako began a rampage across London, killing mages in an attempt to track down the branch. John, realising that he could kill two birds with one stone, sent it to the villainousLord Calvin Burnham. Mako followed its signature to the address and killed Burnham's butler and pet magician. But before he could claim Burnham (whom he believed to be Constantine), the billionaire proposed a deal that would give them both what they wanted. (Hellblazer issue 241-242, 2008)

Burnham was in possession of a mirror that would open a gateway to Hell - a source of power far stronger than mere human souls. But it would only work with Burnham's permission. The lord proposed that he would give over the mirror in exchange for Mako building him a soul cage that Burnham would enter upon death - saving him from the fires of Hell. All Mako had to do was populate it with enough diversions and perversions to last eternity. But while Mako was inside the cage, Constantine projected himself into it in the guise of Burnham. He severed Mako's link with his body, trapping him in the soul cage, and released the trapped souls Mako had used for Burnham's harem. Soon after John killed Burnham, leaving him to Mako's not-so-tender mercies. (Hellblazer issue 247-248, 2008)