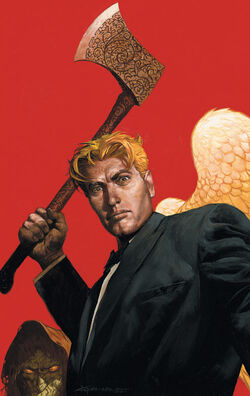 Lucifer Morningstar is a fallen angel and former ruler of Hell, which he oversaw as part of a triumverate. In the pages of The Sandman, Lucifer abandoned his control over Hell, allowing The First of the Fallen, who had always considered himself to be its true ruler (even though he was weaker and more vulnerable than Lucifer in every way). After he abandoned Hell, he gave the ownership to the First of the Fallen, and also to the other Lords of Hell.

Lucifer had ruled as Lord of Hell for 10,000,000,000 years after rebelling three seconds after Creation. Over that time, he had manipulated the various demons of Hell against each other, oversaw the place in which dead mortals were tormented, and led the war against Heaven. However, at some point during his rule, he had become bored with his existence. He became tired of the various stereotypes and prejudices that mortals held of him, such as the idea that he purchased and traded for souls, which were largely untrue, and that he forced mortals to commit evil acts. He had become tired of his reign over Hell, and felt it an unfair punishment that he should have to rule there forever simply because he once rebelled. By the end of the series, however, it is revealed that Hell was not a punishment, but a gift: being the furthest possible place from God, Lucifer could theoretically be free from predestination and God's omniscience. However, this turned out to be a lie, as God continued to study both Lucifer and Michael Demiurgos during all of eternity (which partly explains how Lucifer felt cheated by his father and simply left Hell into someone else's care). Lucifer never created the physical features of Hell - Hell created itself around him.

Lucifer possesses nigh-omnipotent supernatural power; he can shape the matter of Creation into anything he can imagine, including matter, energy, and more abstract concepts, such as time.[9] However, he does have certain limitations. Simply put, he cannot create something out of nothing. He needs existing matter (and where that is unavailable, the Demiurgic power of the Archangel Michael) to provide the foundation for him to shape. Only his brother Michael Demiurgos is his equal in power and only God is his superior. However, in certain dimensions, he is powerless and his mobility is limited without his angelic wings. He may choose to temporarily abandon his powers (including immortality). In the story titled "Lilith", it is implied that his father (God) could destroy him at His own whim - which makes Lucifer sometimes wonder why His father hasn't dealt with him already.

He is never without the formidable resources of his brilliant, nigh-omniscient intellect and his unbending will or inner strength, however. Although Lucifer's overt exercise of power is limited in the books, if he is provoked to violence, his preference seems to be to use fire as a weapon. His original role was as "God's lamplighter", in which he used his will to condense clouds of hydrogen into star-masses and set them alight. As terrifying as they are brief, battles with Lucifer usually begin (and end) with him drawing down the flames of some superheated star and incinerating to ash anything in the immediate area. However, the true reasons why he favors light and fire are partially explained in the story "Lilith" (from "Lucifer: The Wolf Beneath the Tree").

Lucifer possesses the common Archangelic powers; vast godly-strength that rivals that of Asmodel, invulnerability, flight and telepathy. As an Archangel, his powers are superior to other angels.

In the DC Universe

In the New 52 reboot, which takes place outside the continuity established by Hellblazer and Lucifer, and instead exists in a more familiar realm of superheroes and supervillains, Lucifer is shown to possess power over the human soul itself. However, he has no power over animal souls. He can open and close magical portals to Earth from Hell and back again. He can use this power to either summon or lick demons, as he does with Etrigan. He is clairvoyant, posessing a heightened perception or knowledge of time, even to the extent of being able to know the future.