Start a Wiki
The Lord of the Dance 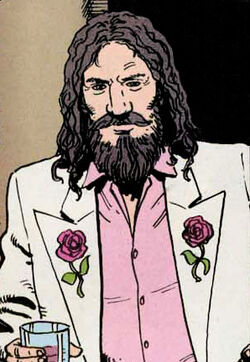 The Lord of the Dance is a god of merriment, drinking and fun. He first appeared in Hellblazer issue 49.

The Lord of the Dance appears as a towering man, around seven feet tall, with a large beard and masses of hair. He usually wears a head-dress made of antlers but has been known to dress in a white suit when required.

Being an avatar of rejoicing and merriment, The Lord of the Dance has a jovial, kindly and gregarious attitude and is extremely loyal to his friends. He is, as one might expect, the life and soul of every party. Literally.

The Lord of the Dance was a pagan god of joy, parties and merriment who would dance alongside ancient Britons during their winter festivals. Over time, however, his worshippers were killed or converted by Christian missionaries, leaving him without any belief to sustain him. (Hellblazer issue 49, 1992)

One Christmas Eve he encountered John Constantine, who took him to a local pub. There, the Lord was able to absorb some of the happiness of the revellers, restoring his power and faith in humanity. (Hellblazer issue 49, 1992)

A year later, on John's fortieth birthday, The Lord of the Dance returned to throw him a birthday party, inviting a bunch of friends: Swamp Thing, Zatanna, Ellie, Nigel Archer, Header, Rick the Vic and Mange. After the party, when it was only him and John left, The Lord promised to stand by him when the time came. (Hellblazer issue 63, 1993)

That time turned out to be one year on, as The First of the Fallen marshalled his forces to kill John. The Lord of the Dance confronted and attacked him in Hell but The First tore out his ribcage, letting him live only because he planned to have a party once Constantine was dead. The Lord hasn't been heard from since. (Hellblazer issue 80, 1994)

However, in the recent Hellblazer issue 287, it is revealed that Hell kept the Lord's remains in an aquarium that served as a trophy for all of John Constantine's friends.

Retrieved from "https://hellblazer.fandom.com/wiki/Lord_of_the_Dance?oldid=10834"
Community content is available under CC-BY-SA unless otherwise noted.