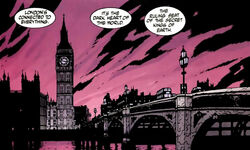 London is the capital of Britain and John Constantine's adopted home, so unsurprisingly its first appearance was in Hellblazer issue 1. Though Constantine has lived and travelled all over the world, the majority of his adventures are set in and around the city.

August 1665: Barnaby Magnus confronts a demon planning to feed on the souls of black plague victims to gain control of the city. He defeats it and binds it inside the London Stone, where it remains for 400 years. The spell requires people to mark sigils at particular points on the London map; to ensure that this information is passed down, Barnaby creates a system of 'runs' that he teaches to hackney carriage drivers across the city. These runs eventually become 'The Knowledge', taught to trainee London cab drivers to this day. (Chas: The Knowledge issue two, 2008)