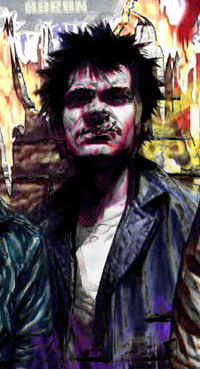 Les (last name unknown) was the bass player for the punk band, Mucous Membrane, the punk band fronted by John Constantine. He is the listed bass player on the recording of  Venus of the Hard Sell, the band's only known single.

In the years since the band broke up in 1979, the whereabouts of Les have remained unknown, as is whether he is dying or dead. His remaining bandmates Gary Lester and Beano had passed on some years ago, while more recently, John Constantine was killed by a gunshot wound to the chest in a suspected gangland murder at his residence in March 2013, just 2 months prior to his 60th birthday.

These are the only known photographs in which Les appears: